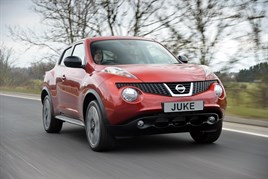 The 1.5-litre dCi diesel engine in the Nissan Juke has been revised, bringing emissions down from 135g/km to 109g/km.

The changes have also seen fuel economy improved with a combined figure of 67.3mpg. Maximum torque has been boosted from 240Nm to 260Nm at 1,750rpm, with 80 per cent of this figure available from just 1,500rpm to improve driveability.

The improvements have been made by including stop/start as standard and changing the gear ratios. The 1st and 2nd ratios are a little shorter to allow sharper responses at low speeds, while the remaining four ratios are slightly longer, taking advantage of the improved torque to deliver better fuel efficiency.

The unit’s overall power output remains at 110bhp while performance figures (109mph maximum speed, 0-62mph in 11.2sec) are also unchanged. The new generation engine will be available across all Juke grades excluding the Nismo.