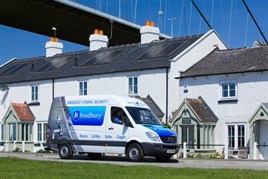 The company, which also produces security grilles, cages and safes, has assigned the Sprinter 313 CDIs to its engineers, who provide a nationwide repair and maintenance service.

Racked out to carry tools and equipment, its new Sprinters are all Medium-length models and were supplied by Northside Truck & Van, Hull. The same dealer also supplied Bradbury Group last December with its first Mercedes-Benz vans, five Long-bodied Sprinter 313 CDIs, which have already clocked up 40,000 miles each.

Production director Darren Bamford said: “Our distribution vans will cover some 80,000 miles a year so reliability was at the top of our list of our priorities. We’ve rented Mercedes-Benz vehicles in the past and we know that whereas other manufacturers’ vans start falling to pieces at about 180,000 miles, the Sprinter just keeps on going.

“It’s also well equipped, popular with our staff, and widely recognised as the safest van on the road. That’s crucial because as a business we take our duty of care commitments to employees and other road users very seriously indeed.”

The operator’s Sprinters are being maintained by Northside and other members of the manufacturer’s franchised UK network, under a Mercedes-Benz service care package contract.

Bamford added: “It’s very reassuring to know that we have an organisation like Mercedes-Benz behind us. As for Northside, their service has been fantastic. We have been ‘bitten’ in the past by suppliers who failed to provide trustworthy aftercare, but Northside have delivered on all their promises.

“They’ve provided us with demonstrators which we could try for size before placing our orders, and were proactive in arranging the first services for our initial batch of Sprinters, with everything then being done on time.

“The dealer also put together an introductory driver’s pack and has assured us that back-up vans are available should we need them. All in all, the relationship has got off to a great start and I have every expectation that this will continue.”