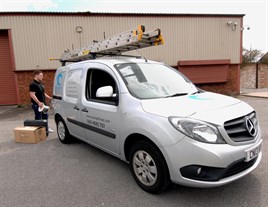 A businessman has decided to switch his entire fleet to Mercedes vans after attending a customer service event.

The founder of Cardiff-based Concept Fire & Security, Mr Smith was previously running seven light commercial vehicles, six of them by a rival manufacturer. His only Mercedes-Benz at that time was the Vito he inherited from wife Amanda, when she sold her florist’s business.

But since attending the Mercedes-Benz Van Experience last year as a guest of South Wales dealer Euro Commercials, Mr Smith has invested in two more Vito models as well as his first vehicle from the new Citan range, and is resolved to replace his three remaining vans with new Mercedes at the first opportunity.

The recently-launched Citan marks the entry of Mercedes-Benz into the small van market. Concept’s Citan 109 CDI BlueEfficiency combines a frugal 90 bhp diesel engine with a series of measures designed to further reduce fuel consumption. These include the start/stop function, low rolling resistance tyres and optimised alternator and battery management systems. The result is a market-leading economy figure of up to 65.7 mpg and CO2 emissions of 112 g/km.

Staged over a couple of weeks each year at the Warwickshire test facility of race and rally car builder Prodrive, the hugely successful Mercedes-Benz Van Experience has given thousands of existing and prospective customers the chance to put Britain’s finest light commercial vehicles through their paces and compare them with equivalent models by rival manufacturers.

Mr Smith said: “I had an excellent day at Van Experience. Having driven Mercedes-Benz vehicles and seen for myself how much better they are than other makes of vehicle, particularly in terms of their brilliant safety systems, I’d never go back now.

“I came away determined to move my whole fleet across to Mercedes-Benz as soon as possible. Not only are they much safer, they’re also driver-friendly in terms of both comfort and practicality, while the prestigious brand image can only reinforce our own company’s reputation for quality.”

One of Concept’s new vans is a dynamically-styled Vito 116 CDI Sport Dualiner with second row of seats, which Nick Kelly uses as his personal transport. The others are assigned to the company’s field engineers.

Mr Smith added: “It’s a case of ‘horses for courses’. We use the bigger Vito for installations and the smaller, more fuel-efficient Citan for lighter maintenance and repair work.”