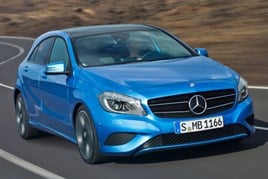 British MEP Chris Davies has demanded that there is a recall of all Mercedes-Benz vehicles fitted with an illegal air conditioning gas.

European rules came into force at the start of the year that require manufacturers to use a new gas called HFO1234yf, which is less polluting than the previous air-con coolant, R134a.

However, tests carried out by Mercedes-Benz suggest that HFO1234yf is at risk of self-igniting in the event of an accident if the air-con pipe fractures.

When it does, the company said, it releases dangerous hydrofluoride gas which can disable and kill even in very small quantities.

As a result, Mercedes-Benz, backed by the German authorities, has decided not to use the new coolant gas in its latest models, which includes the A-Class.

However, Liberal Democrat MEP Davies has asked the Commission to confirm whether Germany would be allowed to protect Mercedes-Benz and claims he has been told that the German government could now end up in court over the row.

“EU environment laws only work if they are fair to everyone and by letting Daimler off, Germany is being unfair to manufacturers from France to Spain to the Czech Republic,” said Davies.

“A fine for Daimler won’t be enough – there needs to be a recall of all the illegal cars.”

Whatever the outcome, any action by the Commission could have significant implications for Mercedes-Benz.

The company predicts sales of about 25,000 A-Class cars this year in the UK, of which around half will be to fleets.