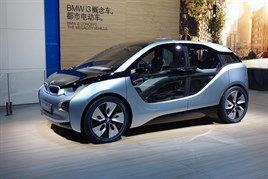 BMW will seek to control both new and used markets for its new electric vehicles in an attempt to protect values.

The company, which unveiled the production version of its i3 electric car last week in a series of simultaneous events across the world, believes it needs to reassure potential customers while the EV market is still in its infancy.

Suzanne Gray, general manager of BMW i, told an audience of almost 200 fleet industry delegates: “The cars will be sold on a fully direct basis. We’re taking the risk out for customers and our network. We have enormous confidence in these vehicles and we are happy to stand by them.

“We will control supply in the marketplace and will manage the situation until the market has matured and has as much confidence in the vehicles as we do.”

There will be 47 sales agents for BMW i in the UK, many of which will be at current corporate hub dealers. There will be dedicated sales areas and expert staff, and these outlets will also be qualified to carry out maintenance on high-voltage components as well as the rest of the car.

A further 100 outlets will be able to carry out diagnostic and body repair work, and there will be two specialist centres for carbon fibre repair.

However, BMW will cover the cost of any transfer between dealers.

And by 2015 the manufacturer is expecting all its dealers to be capable of dealing with high-voltage components.

BMW claims its trials with electric prototypes, including the Mini E and the ActiveE, ensures it comes to market prepared for what customers need from electric vehicles. More than a quarter of a million miles were driven in electric vehicle trials in the UK.

The i3 will have a range of around 80 to 100 miles between charges, and customers can also specify a range-extender version that uses a 650cc motorcycle engine to continue charging the battery after the plug-in charge is depleted, offering a potential 186 miles until recharging or refuelling.

There will be a single customer or driver helpline to deal with any query surrounding charging, and a facility where drivers would be able to swap to a conventional vehicle for a holiday that involved travelling long distances.

BMW says SMR costs for the standard model are around 22% lower than the 1-Series 118d, while the range-extender should be comparable to the 118d.

Aluminium and carbon fibre have been used to help keep weight down, and the i3 tips the scales at less than 1,200kg. However, BMW has also been in consultation with Thatcham and the ABI to ensure they understand how the car is built to try to ensure insurance groups are no higher than necessary.

The i3 is around four metres long, making it comparable in length to a Ford Fiesta, although its wheelbase is longer than that of a 1 Series. It has 50:50 weight distribution and rear-wheel drive.

There will be a choice of four equipment grades: Standard at the entry point to the range, Loft and Lodge mid-grade models with the leather-trimmed Suite at the top, the latter having a premium of around £2,000 over the Standard grade.

Order books are open with first customer deliveries due to take place in mid-November.

Steve Chater, BMW corporate operations manager, said drivers of the i3 would not have to compromise by choosing ‘electromobility’.

“In the future, fleet management will not be about cars: it will be about mobility solutions.

“There is no need to compromise. You get the best of both worlds.”