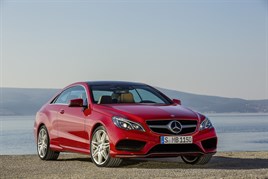 Mercedes-Benz UK has achieved its best-ever July and year-to-date market share results, according to official figures released by the SMMT.

More than 7,500 new cars were registered in July 2013, outperforming the market with an increase in volumes of 15.4% giving the company a record July market share of 4.6%.

Product updates earlier in the year have contributed significantly to the 8,985 E-Class Saloons that have been registered YTD, another record.

The CLS range has also had its best-ever YTD, with 2,565 new cars registered so far.

The current S-Class remains the number one car in the luxury saloon segment, with 910 new cars YTD. Deliveries of the all-new S-Class begin in the autumn.

AMG modelshave also been registered in record numbers, with 89% more new AMGs being registered in July, and 56.5% during first seven months of 2013, compared to last years' previous best-ever performance.

Marcus Breitschwerdt, President and CEO Mercedes-Benz UK, commented:  "After last-month's record first-half-year results, it's great to see the momentum we've built continuing into the summer.  To consistently achieve record market share results in both month- and year-to-date reports shows that our exciting growth is stable, and is sustainable.

"I think the records for our E-Class family are particularly noteworthy.  The significant upgrades we've made to our executive car earlier this year have attracted more British customers into an E-Class than ever before.

"The recent heatwave hasn't dampened anyone's enthusiasm for purchasing a new car.  The forecast for the rest of the year looks good, with things hotting up in the car market, and even more new models coming in the final five months of the year."