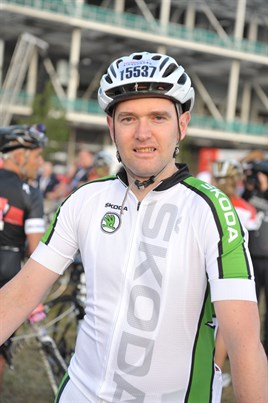 Owen Shepherd, Head of Aftersales for ŠKODA UK, is today resting up following a gruelling 100 mile cycling challenge in aid of the Lymphoma Association.

The inaugural Prudential RideLondon festival, which took place on Saturday 3 August and Sunday 4 August, saw over 16,500 avid cyclists embark on the capital’s first mass-participation sportive. As official vehicle sponsor, ŠKODA UK supplied more than 30 cars to assist in the event.

Owen Shepherd, Head of Aftersales for ŠKODA UK, commented: “It was a great privilege to get in the saddle and take on last year’s Olympic road race route in support of the Lymphoma Association. There is such a groundswell of support for cycling at the minute and I am proud that I could be a part of it, both personally and through ŠKODA UK’s sponsorship of fantastic events like the Prudential RideLondon festival.”

Owen is a keen cyclist but had covered distances of no more than 40-50 miles before signing up. He trained up to three times a week in his native Northamptonshire to prepare for the endurance event.  Raising money for the Lymphoma Association, which supports those affected by lymphatic cancers, Owen completed the challenge in six hours and 45 minutes.

Prudential RideLondon is an annual world-class festival of cycling developed by the Mayor of London, London & Partners and Transport for London in partnership with Surrey County Council.

As official vehicle sponsor to Prudential RideLondon, ŠKODA UK supplied more than 30 cars for the event; including the recently refreshed flagship ŠKODA Superb hatch and Estate, the all-new Octavia Estate, Yeti and Rapid hatchback. With up to 1,865 litres of load capacity* and clever accessories such as roof bars, an internal bicycle holder and towbar preparation, the vehicles assisted cyclists as they covered 100 miles of road.

ŠKODA has a long association with cycling, dating back to the start of the company in 1895 when the founders Vaclav Laurin and Vaclav Klement began manufacturing bicycles in their home town of Mlada Boleslav in the Czech Republic. The manufacturer provides vehicles to the Tour de France and the Tour of Britain, as well as other major cycling races across the world.

To sponsor Owen, or donate to the Lymphoma Association, please visit: http://www.justgiving.com/Owen-Shepherd.