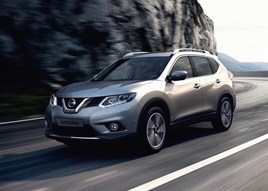 Nissan has launched the new X-Trail 4x4 at the 2013 Frankfurt Motor Show.

It will be on sale from early 2014, and includes wide-opening rear doors, a split cargo area and a powered tailgate.

The vehicle has full 4x4 capability, along with three safety systems for on and off road use.

The two world firsts are Active Ride Control and Active Engine Brake. Active Ride Control monitors the road surface to detect undulations which could potentially upset the pitch of the car body and alters the damping to compensate. Active Engine Brake, meanwhile, harnesses the power and controllability of the Xtronic transmission to add a degree of engine braking while cornering or when decelerating to a standstill. The benefits are greater braking control and enhanced feel with less pedal effort.

The third system is Active Trace Control. By using on board sensors to monitor speed, steering angle, throttle opening and braking effort, Active Trace Control brakes wheels individually, as required, to reduce understeer and help the driver steer a safer path through bends: it is particularly effective on slippery, wet roads.

Built on the new Nissan/Renault Common Module Family (CMF), the model will be available in 190 countries across the globe, built from nine factories worldwide.