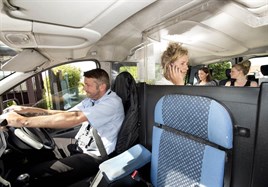 A North East taxi company whose insurance has doubled in the last three years is set to save thousands by installing state of the art CCTV in its fleet.

C&D Taxis, which operates across Tyne and Wear, appointed Sunderland-based Hadrian Technology to install cameras in its cars, which record both inside and outside the vehicle.

The Cygnus cameras that Hadrian Technology install have a front facing camera to record the driver’s view of the road and a rear facing camera to record the inside, and behind the vehicle. The CCTV cameras record images that can help protect against staged accidents and false whiplash claims, driving offences and traffic allegations. Some insurance companies are offering discounts on premiums to taxis with CCTV set-up.

Chris Waterstreet, owner of C&D Taxis said: “CCTV will provide me with evidence of what happens in my taxis. After the initial installation costs, I will re-coup the cost in just one or two years.  I won’t get bogged down with lengthy and expensive investigations when someone makes a claim and hopefully my insurance premium will stop rising each year. At the moment when someone makes a claim, we have no evidence to find out the truth and my insurance company always has to pay out. One insurance company is knocking £500 off taxi insurance premiums if you have CCTV installed.  My colleagues and customers will feel safer when I have these cameras in. For me, I will be saving money and hassle every day.  I would certainly recommend it to other taxi drivers out there.”

Gary Trotter, general manager at Hadrian Technology said: “Local councils around the UK are discussing legislation that will require all licensed vehicles to install CCTV, ensuring the safety of passengers.

“Unfortunately serious offences like assault and sexual abuse, as well as accident claims relating to taxis come up again and again. A system like ours acts as a deterrent and a way of providing hard evidence when allegations are made against the passenger or driver. Cameras installed by Hadrian Technology capture footage that cannot be destroyed, even if someone rips the camera unit off from the car - the images that have been recorded are stored elsewhere in the vehicle.  C&D Taxis will now have the evidence they need to avoid significant and avoidable losses.  I hope we can help other businesses to tackle similar problems.”