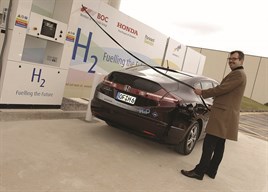 In what was termed as the ‘chicken and egg’ scenario, the message was clear:

Fuel cell and hydrogen technology is market ready and the ideal route to clean transport in Europe.

Industry speakers stressed that no technology succeeds in isolation. Increased production of hydrogen from renewables and hydrogen application for energy storage has the potential to deliver growth and jobs far beyond the transport sector.

Other highlights from industry included:

Hydrogen fuel cell powered vehicles are already on the road, they are safe and ready for the market. Their ranges are comparable to those of internal combustion engine vehicles. They produce no emissions and they are quiet.

The event - under the patronage of Carlo Fidanza, MEP and rapporteur for the clean power for transport package of the European Parliament’s transport and tourism committee - was organised by Air Liquide, Daimler, Honda, Hyundai, Intelligent Energy, Toyota and Linde in partnership with the fuel cells and hydrogen joint undertaking.