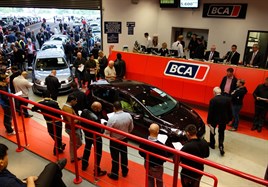 Jardine has staged the biggest sale yet in its exclusive remarketing partnership with BCA, as 340 cars were offered at the Bedford auction centre recently.

The high profile event attracted nearly 300 buyers to BCA Bedford with a further 500 logging in to bid via BCA Live Online.

The sale started at 9.30 am with a section of 60 non-reserve cars, followed by the main event of 280 cars direct from Jardine dealerships nationwide.  Every car was pre-sale prepared and the majority were offered with BCA Assured.

The bidding was fast and furious and five hours later the sale concluded with 336 cars sold for a multi-million pound turnover equivalent to 100% of CAP Clean.

“There was a flurry of bidding as each car was offered, with the BCA Live Online service delivering genuinely incremental buying power. The end result was spectacular with a 99% conversion and a strong performance against CAP Clean.”


BCA’s major account manager Suzanne Spencer said: “This was a significant sale event for Jardine that delivered a superb selection of stock at a variety of price points and it proved irresistible to our buyers.”

BCA remarkets approximately 14,000 vehicles annually as part of an exclusive remarketing partnership with Jardine Motors Group which sells 24 marques from 70 retail outlets across the UK.

BCA also generates brand support for Jardine with posters and point of sale material, as well as tactical media advertising.