Fleets remain at heart of plans to increase EV sales 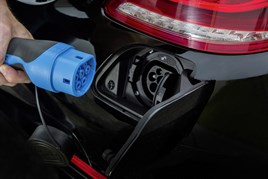 The Government is pinning its hopes on fleets being able to help drive the plug-in car and van market.

It aims to encourage a higher uptake of ultra-low emission vehicles (ULEVs) in the public sector, maintain tax incentives for the purchase of plug-in vehicles until at least 2020 and provide more information for fleet managers on costs.

The details are included in the Government’s new ULEV strategy, Driving the Future Today, a 105-page plan drawn-up by the Office for Low Emission Vehicles (OLEV) after
a further £500 million was earmarked to promote the vehicles between 2015 and 2020.

“This strategy moves us up a gear in pursuing that vision.”

Since 2009, OLEV has considered ULEVs as new cars or vans that emit less than 75g/km of CO2 and the Government has sought to kick-start the market with a range of incentives. It allocated £300m to the plug-in car grant scheme, which was introduced in January 2011 and extended to vans in February 2012.

The grant aims to narrow the gap between the cost of a traditionally-fuelled vehicle and a ULEV.

Although declining, the gap is expected to remain for some years. Until that point, the report says the market is likely to require “continuing support” to alleviate a portion of the extra cost, but incentives cannot be maintained “indefinitely”.

The Government says it will make a decision on what will replace the plug-in grant scheme after consulting with industry.

However, it wants consumer incentives to remain and for them to be technology neutral, to support new technologies such as hydrogen.

OLEV is due to launch the consultation shortly on how best to invest the cash and the new strategy aims to shape that debate.

The report says there are currently barriers and a lack of incentives for public sector fleets to procure ULEVs through existing frameworks.

The Government Procurement Service manages the purchasing activity of central government departments and also makes its frameworks available to the wider public sector.

ULEVs not available in e-auctions

Through these frameworks it is currently possible to buy ULEVs, but it says they are not included in the regular competitions or e-auctions through which buyers access the most competitive rates.

Similarly, the Government Buying Standard for Transport which outlines the mandatory criteria which the Government’s vehicles must meet, and is the best practice standard for the wider public sector, provides no incentive for fleet managers to consider ULEVs.

As a result, it says it will update the Government Buying Standard for Transport by summer 2014 to encourage greater ULEV uptake in the public sector.

It will also develop a procurement specification for ULEVs by February 2014 as a basis for future mass public sector procurement exercises, with the aim of bringing down the cost per vehicle for public sector organisations.

In addition, OLEV will work with HMRC to clarify the tax position for ULEVs and publish this on a factsheet on the OLEV website by May 2014.

He said: “It’s definitely a step in the right direction, but it still needs to stack-up financially.”

The Government has been accused by MPs of not doing enough to encourage fleets to invest in plug-in vehicles, especially by not spending more of its own £400m fleet budget on plug-in technology .

However, there have been examples of public sector fleets embracing the technology. West Midlands Police has placed an order for 30 Nissan Leafs for use by its officers to visit victims of crime and attend other pre-arranged meetings as ‘diary cars’.

The latest figures from OLEV also show that the market for ULEVs is growing, with 1,676 eligible plug-in grant vehicles registered in the first half of 2013, compared to 932 during the same period in 2012, an increase of almost 80% (see graph).

Overall, more than 5,200 cars and vans have qualified for the grant since its launch, with vans equating for less than 10% of eligible vehicles.

However, despite increasing sales, the number of new plug-in vehicles registered to fleets will remain a tiny fraction of a market that will exceed a million cars and vans in 2013. 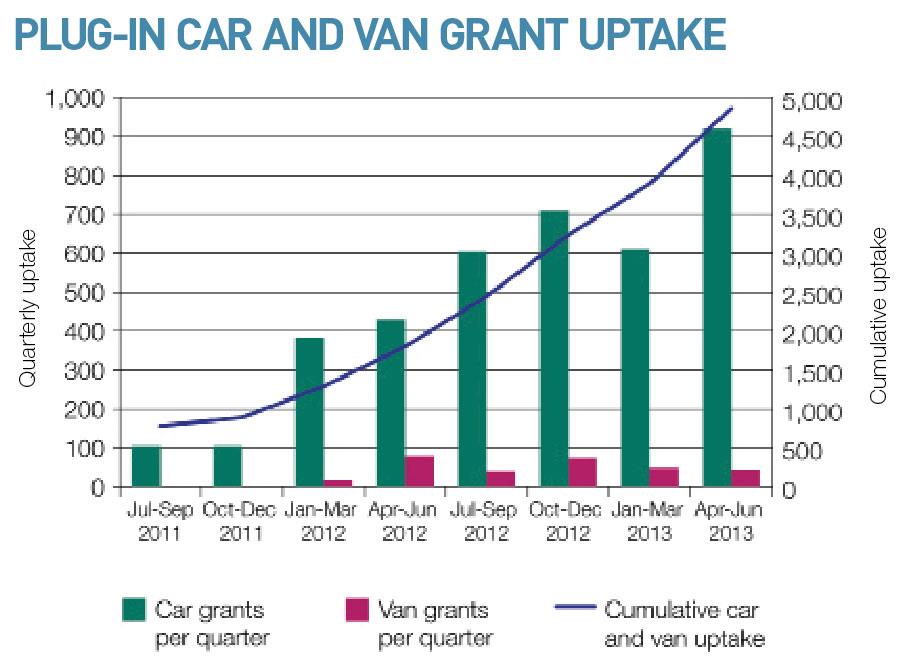