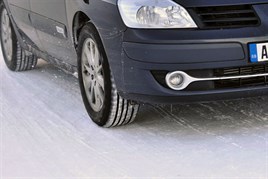 Snow and ice were the cause of more than 6,000 road accidents in Great Britain last year, according to statistics issued by the Department for Transport (DfT) this week.

They show it was motorists who felt the brunt of the treacherous conditions, with 5,070 car accidents being attributed to snow and ice-covered roads.

A further 324 light goods vehicles were also involved in accidents due to wintery conditions, causing chaos for businesses trying to make deliveries and staff struggling to get to work.

ATS Euromaster is reminding fleets that now is the time to prepare their vehicles for the winter months ahead.

Peter Fairlie, ATS Euromaster’s Group Sales Director, says: “Don’t wait until your light commercial vehicles become stranded and can’t make deliveries, or one of your company cars slides out of control and causes an accident.

“Fitting cold weather tyres is a straightforward and cost-effective way to help your fleet not only stay safer when the temperatures plummet, but mobile too.

“The DfT statistics prove how dangerous UK roads can be during winter. It’s little wonder we’ve continued to see an uptake in Fleet Managers equipping cars and vans with cold weather tyres.”

Issued as part of the DfT’s Road Accidents and Safety Annual Report 2012, the statistics also revealed skidding to be the most common form of accident for car and van drivers on ice and snow covered roads, with 2,198 combined cases last year alone.

As a result, summer tyres suffer from reduced grip and braking ability, and deliver a less comfortable ride.

ATS Euromaster expects its sales of budget, mid-range and premium cold weather tyres to exceed £10million in 2013, as the popularity of seasonal fitments continues to grow.

The company has already stockpiled tens of thousands of the specialist tyres in centres nationwide to meet demand.