Camera shows driver not to blame after 'messy' incident 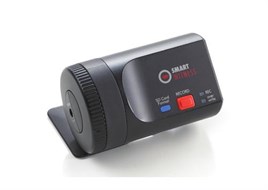 Shocking video footage captures the moment a motorcyclist veers across a winding country lane and is involved in a terrifying collision with a truck.

The video shows the bike being smashed to smithereens after driving into the HGV. Miraculously, the biker escaped with just a broken shoulder after narrowly avoiding being crushed.

The police were called and the HGV driver was allegedly accused of speeding, dangerous driving and poor lane discipline.

His truck was fitted with a Smart Witness vehicle accident camera which proved that the HGV was NOT to blame for the collision. The video proved that he was travelling at just 27mph at the point of collision and driving safely on the correct side of the road.

As soon as the police viewed the footage, the motorcyclist’s complaint was dismissed and a messy and expensive insurance battle was avoided. And crucially, the driver was able to return to work quickly because he knew he had done nothing wrong.

The collision happened on country lanes near to the headquarters of haulage firm John Jempson & Son in Rye, East Sussex. They invested in the £239 cameras for their 65-strong fleet three years ago.

Managing director Mark Chamberlain has been so impressed by their effectiveness he has just replaced the first batch of cameras with a new range.

He said: “This vehicle left our depot at around 6pm for a trip to the Midlands.The driver was travelling safely and within the speed limit on the country lanes near where we are based. You can see on the video that he is passed first by a motorcyclist who turned out to be the female partner of the injured rider.

“The second rider follows very closely behind her. If you slow the video right down you can see that he hits a pothole and veers over the road into the path of our truck after coming out of a corner. There is a collision but thankfully the motorcyclist is lucky and he escapes with a broken shoulder. He is already coming off the bike at the point of impact and he ends up falling to the side of  our truck.

“Our driver is understandably badly shaken by what has happened and is immediately given a week off work to recover. The police quite properly investigate the incident and the first thing they want to see is the footage from Smart Witness.

“This shows quite clearly that our driver is blameless and there is no case to answer. “

Chamberlain said that Jempsons had achieved a significant reduction in their insurance premiums by implementing a number of new safety measures including Smart Witness cameras.

He said: “Without that footage, it could have got very messy because it would have the two motorcyclists challenging the word of my driver.

“But thankfully it was all resolved very quickly when everyone including the police viewed the footage.

“Most importantly for us, it gave peace of mind to our driver. He could see that he was blameless.

“He was obviously upset at the injuries caused to the motorcyclist and we gave him a week to recover. But after that he was able to go back to work knowing he had done absolutely nothing wrong and without any lingering feelings of guilt.”

Chamberlain said that the Smart Witness cameras had helped to improve road safety.

He said: “Our drivers like having them in the cab.  Obviously if you are innocent then the footage from the cameras will quickly establish that.

“If a driver has done something silly, it proves that, too. But we have found that in most cases the cameras are helping us to establish innocence rather than guilt. “

He said: “In a case like this motorcycle collision, a long and protracted claim was quickly avoid.

“Our cameras are able to protect hauliers’ claims history and ensure that premiums can be reduced in the long-term. You can avoid the, ‘He said, she said’ claim and counter-claim which happens in so many accidents and is never resolved to anyone’s satisfaction."