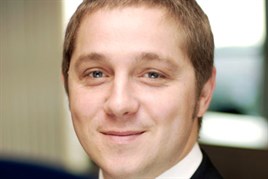 After almost 10 years at Honda, Lee Wheeler will be leaving his post as manager of corporate operations at the end of January 2014. He will be taking up a global role at Santander Consumer, a division of Santander Bank.

Leon Brannan, head of cars, Honda (UK), said: “I would like to say a big thank you to Lee for all his hard work and enthusiasm over the last 10 years.

“He has been instrumental in successfully launching the Civic and CR-V 1.6 i-DTEC models into the fleet market since he took on the corporate operations role. He will be sorely missed.

“Naturally we will be sad to see Lee go, but at the same time have to congratulate Lee on the new opportunity and wish him all the very best in the future.”

Wheeler said: "I have enjoyed my time at Honda immensely and look forward to seeing Honda's fleet success gain even more traction in 2014."

Wheeler first joined the Honda family back in 2004 in Honda Finance Europe before joining Honda (UK) when he has spent time as national leasing & SMR manager and manager of sales support. He was also responsible for the commercial & business planning team before he was appointed manager of corporate operations in September 2012.

Wheeler’s final day at Honda (UK) is January 31 and his successor will be announced in due course.