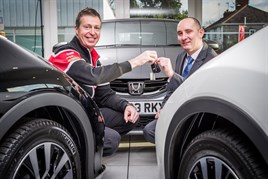 The fleet deal will see Honda (UK) become sole fleet supplier to Foresters for at least the next three years, marking the return of a partnership between the two companies which began in 2003.

Neal is a big fan of the Civic himself, having enjoyed many successes in it during seven BTCC seasons since 2003.

The recently introduced Honda Civic powered by the 1.6 i-DTEC diesel engine emits just 94g/km of CO2 with a powerful 120PS.

The 1.6 i-DTEC engine in the Civic is the first to be launched in Europe under Honda’s flagship Earth Dreams Technology environmental programme.

Euan Allison, group managing director of Foresters, said: “We have bought Honda Civics in the past and, after trying some other premium brands in the interim, are pleased to welcome Honda back to the Foresters fleet.

“Honda really seems to have got the Civic diesel package right for the fleet market, responding to the demands we make on a car manufacturer – the need for company tax efficiency, high mpg, low emissions and surprisingly low BIK implications.

“All of these factors, and the fact that the Civic is British-built, add up to a compelling fleet motoring package that exceeds our requirements.”

Gail Chambers, national corporate sales manager for Honda (UK), added: “As a company providing financial services products for some 135 years, Foresters clearly knows what is required to be successful in business.

“We have worked very closely with them to understand their company car requirements, and the result is this significant fleet order which further underlines the growing reputation of the new Civic as a corporate favourite.

“We are delighted to once again be working in partnership with Foresters to meet all of their driver’s needs while keeping their carbon footprint and fleet costs low.”

The new Civics are being supplied through the Marshall Motor Group – the largest Honda retail partner in the UK – with the arrangement brokered on behalf of Foresters by contract hire specialists, Marshall Leasing.

Marshall Leasing has been providing full support as Foresters goes through the process of renewing its fleet. This has included arranging an opportunity for the Foresters team to test drive vehicles.

In addition, Marshall Leasing has been involved in communication with the drivers themselves.

Jonathan Ross, sales and marketing director at Marshall Leasing, said: "We try to treat the drivers as our customers as well as the company itself - they are, after all, the end user.

“Effective communication is an important part of the process. We've been actively engaging with Foresters' drivers helping them to prepare for the transition, and we've had very positive feedback as a result."