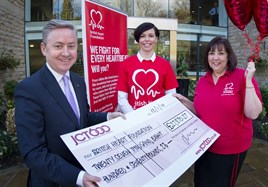 Colleagues at Yorkshire motor business JCT600 have raised £27,870 for the company’s chosen charity of 2013, the British Heart Foundation.

Over the last 12 months, JCT600’s 1,800-strong team across the Bradford head office and its 47 dealerships have taken part in a huge range of fund-raising activities, many of which were exercise and health-related, to support the company’s first annual nominated charity.

“From numerous hikes, cycle rides and football matches to a company-wide Yorkshire Three Peaks walk and even a sky dive, our team has pulled out all the stops to raise funds for the British Heart Foundation as well as getting healthier along the way,” said John Tordoff, chief executive of  JCT600. “While JCT600 has long supported charity and community initiatives, it’s been great to see everyone pulling together last year for a common cause.  By consolidating our efforts, we have been able to raise a significant amount for a charity which our team feels makes a significant difference to people’s lives.”

Colleagues have once again been invited to put forward suggestions for charities which they would like to be the focus of the company’s fund-raising activities for the coming year and JCT600’s nominated charity for 2014 will be announced soon.

Sue Green, fundraising volunteer manager from the British Heart Foundation said: “JCT600’s support has been fantastic and has far exceeded our expectations.  The funds they have raised will play an important role in helping us in our fight against heart disease and we would like to thank everyone who has supported JCT600.”