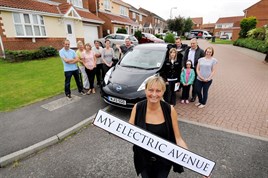 A trial established to ensure power companies can meet anticipated demand from electric vehicle (EV) drivers will include a business fleet for the first time.

The £9 million My Electric Avenue project was launched in June to give electricity providers data that will enable them to manage future strains on their supply network.

Over the past six months, seven clusters of 10 neighbours have been identified and these are now receiving leased all-electric Nissan Leafs at a subsidised rate of around £100 a month for 18 months.

For the trial’s duration, the electricity used to charge these vehicles will be monitored to inform future policy decisions.

Fleet News has learned that a business will also be signed up to the scheme and receive a fleet of Leafs.

The trial’s organisers are currently in the process of identifying this company which will become the first in Britain to take part in a project of this nature.

This business, like each household taking part, will have specialist equipment installed on its premises alongside the charging point. This technology, called Esprit, has been developed by Chester-based EA Technology Group, which is also running the scheme, to monitor and control the electricity used when the car is plugged-in.

Richard Hartshorn, project developer for Scottish and Southern Energy Power Distribution (SSEPD), which is hosting the My Electric Avenue trial on its network, said: “This project will give us an idea about meeting the expected demand for electricity in 2030.

“The sales of EVs have continued to grow over the past few years and are set to increase even more – we want to keep the lights on for our customers.

“This trial will provide us with the hard facts and figures that will influence our future decisions so that we can avoid overload on the cables.

“In addition to monitoring the impact that up to 10 neighbouring properties charging will place on us, we’re also in the process of identifying a business which will also take part in the scheme.

“This will shed further insight into charging habits and requirements for a small fleet.

“For example, we’ll know how often they need to be charged and, from data gathered from the Leafs, whether there’s regularly a need for the cars to be charged elsewhere.

“All this information will be used to shape our policy and we’ll also be sharing it with other electricity companies to assist them too.”

In addition to the network operators, the knowledge gained from My Electric Avenue will also be shared with the Government, the energy industry, the low carbon vehicle sector and the general public.

After the project launched last June, the organisers received around 2,000 registrations for this component which is known as the Technical Trials.

Gill Nowell, a senior consultant at EA Technology, said: “There’s a lot of different equipment that needs to be installed for each cluster and we’ll be announcing new ones in the near future. One of these will be a business-based cluster.

“There will also be charging points at the work address and we’ll monitor their charging behaviour.

“If all these EVs in each cluster were charged at the same time it would pose a huge strain on the electricity network.

“By using Esprit to monitor when the charging takes place, we hope to learn ways to control this in the future.”

The My Electric Avenue project has been funded through electricity regulator Ofgem through the Low Carbon Networks (LCN) fund. This fund was established to help companies running the power networks provide security of supply as Britain moves towards a low carbon economy.