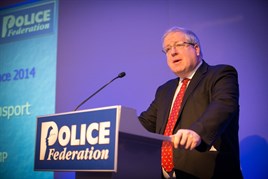 The Secretary of State for Transport has praised the road safety role of fleet managers at the National Roads Policing Conference.

Patrick McLoughlin was unveiling a series of measures to tackle drug-driving, but began by paying tribute to those involved in helping reduce road casualties.

He said: “We are fortunate in this country to have one of the best road safety records in the world. That’s due to the efforts of many different people working for many different organisations – from car designers and fleet managers to local authority planners and road safety charities.”

But McLoughlin told delegates: “The challenge for all of us in the road safety industry is how to continue improving – how to set higher standards, year after year.”

Police have been working with alcohol breathalysers, backed by a legal drink-drive limit, since 1967.

By comparison, McLoughlin said the fight against drug-driving “is only just beginning”.

Drug-driving is estimated to cause 200 deaths a year, yet perpetrators are 50 times less likely to be convicted than drink-drivers.

The difficulty for police is proving that impaired driving is due to a drug.

“That’s why we introduced a new offence of driving over a particular limit for specified controlled drugs, which brings the law into line with drink-driving.”

Offenders who are caught under the new law will get an automatic 12-month ban, as well as facing up to six months in jail and a £5,000 fine.

The result of a consultation on the limits for 16 different types of drug was revealed last summer, while the DfT is currently consulting on a limit for amphetamines.

It expects to finalise the regulations and introduce the offence as early as this summer, subject to Parliamentary approval.

In the meantime, McLoughlin has announced funding for station-based cannabis screening devices, which a number of police forces will begin using soon.

“It’s not a big programme at this stage,” he said. “The investment is around £120,000. But it’s certainly a significant step in the right direction.”

The new devices are expected to be introduced to 11 forces across England and Wales, including Gloucestershire, Hampshire and Greater Manchester. It means there will be no need to wait for a medical practitioner to advise whether a driver’s condition is the result of taking a drug.

The DfT is also working to make mobile screening devices available shortly after the new offence comes into force, so officers can use them at the roadside.

“We know that drug-driving enforcement is complex compared with alcohol,” he said. “But this is just the start.”

By working closely with roads police, the DfT says it will be able to refine the technology and the enforcement strategy over time.

Screening for cannabis is a good place to begin. “It’s one of the most widely-used drugs, and it can also significantly impair a motorist’s ability to drive safely,” said McLoughlin.

“That’s why we hope police will embrace the new screeners and the new powers as a first step in stamping out drug-driving.”

Meanwhile, the fleet industry has a vital role to play in educating employees, especially when figures suggest company car and van drivers are far from immune from drug-driving.

In an extreme example, drug and alcohol testing company DTec said one in four drivers within a sample group of a company it drug tested returned a positive test.

However, on average, DTec says it would expect positive samples from 5% of employees tested, which still equates to one in 20 drivers.

McLoughlin concluded: “It’s important that people understand the risks of driving while under the influence of alcohol or drugs.

“That not only means risks to other road users, but the personal risk too.”