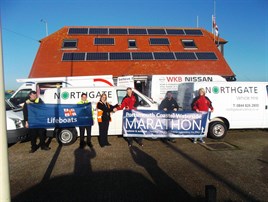 Northgate Vehicle Hire’s Portsmouth branch has supported the RNLI with the donation of three vans for the Portsmouth Coastal Waterside Marathon.

The donated vehicles were used by the dedicated marathon team to transport essential water supplies to the race and later became water supply stations for those taking part in the charity event.

The fourth Portsmouth Coastal Waterside Marathon saw a record 1,650 people take part in the six-hour run, from the South Parade Pier to Hayling Billy Island and back.

All of the funds raised have been donated to support the RNLI, which provides an on call 24-hour lifeboat search and rescue service for the UK and Ireland, as well as a seasonal lifeguard service.

Kirsty Goble, branch manager at Northgate Portsmouth, said: “We’re thrilled to have supported the RNLI, which patrols over 200 beaches across the Untied Kingdom and Channel Islands.

"The marathon is a fantastic cause and a great opportunity for people to do something a little different before they get stuck into Christmas. We’re very impressed with the £4,000 raised and feel proud to have supported such a worthy cause with the provision of our vehicles.”

Robert Piggott, RNLI fundraiser, added: “I would like to thank everybody at Northgate Vehicle Hire for the vital support they provided in the Portsmouth Coastal Waterside Marathon.

"The RNLI is committed to saving lives at sea and providing safety advice and flood rescue. Through the support of organisations like Northgate we are able to rescue an average of 22 people a day. This year’s event was a huge success and we will continue to raise funds in the area into the New Year.”