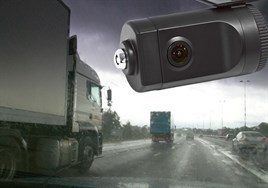 An in-car camera from Smart Witness has shown three vehicles narrowly avoiding a head-on collision due to the reckless overtaking manoeuvre of one driver.

A white car is caught on camera attempting to overtake a lorry on a quiet country road. The driver fails to spot an oncoming vehicle and a horrific three-way smash is only avoided by the narrowest of margins.

In this case, the driver of the white car did at least pull over after the incident.

Marsh said: "It's a miracle that there wasn't a three-way collision - I've never seen a closer head-on near-miss caught on our cameras and the actions of the driver of the white car were crazy.

"Footage like this is vital in improving driver safety. We encourage and train our clients to use our cameras to educate their own drivers as well as to guard against the recklessness and sometimes false allegations of other drivers.

"Clearly the HGV driver in this case was blameless but it's amazing how effective the footage is in improving driver behaviour. We find clients are now more than ever using footage to train drivers and improve road safety."

The company has now introduced a new safety measure to monitor drivers - the Enhanced Driver Report. The camera's software will gauge the competence of driver over a month's worth of driving data.

Marsh continued: "They are given a grading from an A to an E, based on a month's worth of driving. Obviously fleet managers will know who their best drivers are but it will certainly help find drivers that are in need of retraining.

"But the cameras make sure that drivers are constantly vigilant when they are out on the roads on their own."

Marsh founded Smart Witness after running a transport company with 200 vehicles, and tragically losing two of his employees in separate incidents in 2005/6.

Marsh added: "I have always been keen to be the first to trial and use any products which improve safety. When I was running my own fleet I spent tens of thousands on new developments including at the time, Lane Departure Warning, Proximity and Active Braking.

"But the key message to all drivers is to avoid events that will lead to incidents in the first place - and the best way to do that is to modify a driver's behaviour."