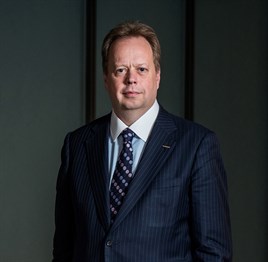 Palmer was named a Companion of The Order of St. Michael and St. George (CMG). The prestigious award, which was given in recognition of services to the British automotive industry, highlights the important role Palmer has played in championing the UK as an automotive manufacturing base.

The Order of St Michael and St George is awarded to men and women who render extraordinary or important non-military service in a foreign country. Palmer was recognised in the Foreign and Commonwealth Office Diplomatic Service and Overseas New Year 2014 Honours List, released on December 30, 2013.

As a global Nissan executive, Palmer has played a major part in bringing a number of significant projects to the UK through his extensive knowledge of the nation's manufacturing and skills capabilities.

Palmer has also been an influential figure in the establishment of a number of long-term partnerships such as Infiniti Red Bull Racing in Formula One and the high-performance programme with Williams Advanced Engineering.

Commenting on the award, Palmer said: "This award is a genuine surprise and I am humbled, honoured and extremely delighted to receive it. I would like to thank all the people of Nissan that have helped me achieve this.

"I started my automotive career 35 years ago with an apprenticeship and then moved to Austin Rover. With 23 years at Nissan in the UK, I am immensely proud of all that we have achieved in making the UK a critical part of Nissan's design, R&D and manufacturing operations.

“The UK has a wealth of automotive talent and expertise and it is vital that we continue in our efforts to attract the next generation and promote all that the industry has to offer."