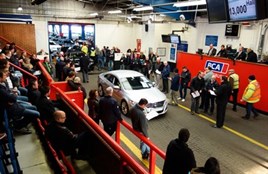 BCA data shows average values rose to a new high in December as used cars averaged £7,573 across the board, a month-on-month rise of £84 (1.1%) compared to November.

Year-on-year, December 2013 was ahead by £212 or 2.8%. Average mileage and age both rose slightly over the month as BCA sold a higher percentage of dealer part-exchange vehicles. Average performance against CAP Clean was marginally higher at 96.8%, both month-on-month and year-on-year.

Simon Henstock, BCA UK operations director said "December is a short month for trading and the remarketing sector continued to experience a reduced supply of retail-ready stock. Model mix tends to change as fleet and lease cars can be held for the New Year, while dealers will often retain part-exchange vehicles to meet the January demand from retail customers.

"This aside, December continued the long term trend of rising average values in the wholesale markets and a new record was established, beating the previous highpoint which was seen exactly 12 months earlier in December 2012.

He said that looking ahead to 2014, there were no signs that demand for retail quality used cars is going to ebb, so expected values to remain strong.

"Sourcing vehicles will continue to be a major concern for used car dealers and if the economy continues to improve, increasing retail demand could mean there is even more competition for stock in the remarketing sector," said Henstock.

"The markets remained very active in December, despite the shortage of stock. BCA also offered hundreds of vehicles between Christmas and New Year from a range of major blue chip vendors via the Buy Now digital channel, with a simple ‘click to buy' process."

Fleet and lease cars averaged £9,162 in November, the second highest value on record despite falling by £139 (1.5%) over the month. Values were up by £653 (7.6%) year on year. CAP performance fell back from last month to 95.84% but was ahead year-on-year. Retained value against original manufacturers retail price was down a point compared to November, but up year-on-year.