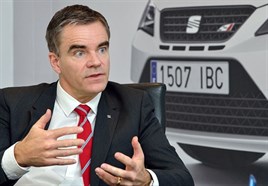 Seat is increasing the number of demonstrators available to fleets as it bids to get more potential customers behind the wheel.

UK director Neil Williamson (pictured) is confident that when people drive a Seat they will enjoy the experienced and that, combined with competitive running costs, will give the brand an edge when it comes to gaining greater acceptance among company car drivers.

Cost of ownership has improved in the past year following action to minimise short-cycle rental registrations.

Although Williamson would not give figures, he told Fleet News at the Paris Motor Show 2014 hat the figures were “significant” and, as part of Seat’s three-year planning cycle, “we will see it reduce further”.

He added: “We needed to address it and we have now.”

Rental business has been replaced with genuine fleet sales to leasing and corporates during what Williamson is describing as Seat’s “year of fleet”.

“We are pointing our resource at the right areas and we are speaking to the right people,” he said. “We have changed the way we market our fleet operations by speaking to smaller groups and holding driving days. Our communications has been up-weighted.”

Seat has now established its network of fleet specialists, although Williamson doesn’t rule out doubling the present number of sites from the current mid 20s. Leads are create centrally but fulfilled by dealers, who also generate their own leads among smaller, local businesses.

“Our dealers give us an advantage; they understand the need for local relationships with the customer no matter where the deal is done for the car – it means two or three services, repair work and possible referrals ,” Williamson said.