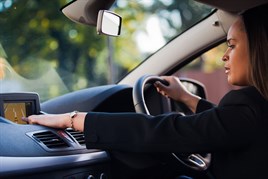 A majority of British drivers have no idea of how to read a map and are likely to find themselves hopelessly lost without their satnav.

That's according to a British vehicle leasing company which has found that people rely on their electronic devices so heavily that they often have no idea of the route they've taken to reach their destination.

On top of that, Flexed.co.uk has found that virtually everybody who has used a satellite navigation device has found themselves lost in the last mile of a journey at some time or other because it is unable to take them to the exact spot to which they're driving.

"We're all guilty," said Johnny Ratcliffe from Flexed.co.uk. "We so fixed on that tiny screen on the dashboard that we've got no idea where we're being taken."

Flexed spoke to 1,150 private and commercial drivers about their satellite navigation use, and found that three-quarters (77%) of respondents who use a satnav rely on it totally on a journey.

In addition, almost two-thirds (63%) of drivers don't bother with road signs when they're using a satnav device and 60% say they can't read a paper map.

The survey also revealed that 91% of respondents said they've got lost in the last mile of a journey because the device has announced they've arrived ‘too early’ and less than one in ten (9%) said they research the route before taking an unfamiliar journey.

"It's becoming very clear that satellite navigation is making drivers lazy," said Ratcliffe, "and it's got to the point where people arrive at their destination with no clear idea how they got there."

Flexed.co.uk thinks that satnav also erases common sense from the equation, particularly when driving in town or city centres.

Ratcliffe asked: "How many times have you seen a driver make a sudden change of lane because they're following the satnav instructions rather than following signs and road markings?

"It's an added level of danger on our roads to which many of us won't admit."

This is more than amply illustrated with the huge majority of drivers admitting that they have found themselves lost in the last mile of a journey, usually because the device has finished giving instructions, and cannot help with small yet vital details such as exact addresses and quirks of location.

There's a lesson to learn from that experience which can be used by drivers everywhere, according to Ratcliffe.

"In the old days it would have been a map, forward planning and using the eyes in my head," he said.

Flexed.co.uk urges drivers to do the same, and says that people should become more familiar with the forgotten skills of map-reading.

"Over reliance on satnavs makes zombie drivers out of us," Ratcliffe concluded. "It's absolutely okay to switch it off and follow the road signs. You might even get there quicker."