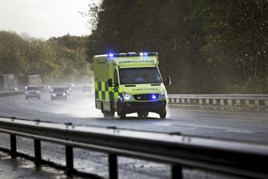 A seven-point plan to achieving zero deaths on the UK’s roads within the next decade has been unveiled by a road safety charity.

They include making autonomous emergency braking (AEB) compulsory on all new cars from 2017 and encouraging employers to stipulate a minimum EuroNCAP star rating for company vehicles.

Lord Whitty, chairman of the RSF, said: “We can no longer accept sudden, violent road death as such a significant cause of premature loss of life.”

The RSF report says employers have the opportunity to reduce the cost of road crashes and at the same time improve efficiency and safety.

However, it says there is “often little awareness” from employers about duty of care, beyond ensuring drivers have a licence and the vehicle has an MOT.

The report also claims that few firms realise how important management control in this area is to their business.

The RSF suggests fleets should ensure employees have information about the EuroNCAP safety rating of cars and be encouraged to choose vehicles with higher star ratings.

According to a Fleet News poll, more than half of fleets (58%) do not use Euro NCAP when selecting cars, while just one-in-five (21%) insist on five-star models.

Meanwhile, simple measures such as fatigue management, rules on alcohol use and banning the use of mobile phones while driving would also help, the RSF said.

Savings would be inevitable. Crashes cost the British economy more than £30 billion a year, which is borne by taxpayers and businesses through taxation and direct costs.

Motor insurance, for example, is a significant direct expense for many fleet operators and households, which collectively costs the nation £10bn a year.

About £5bn of this goes towards bodily injury claims, with individual court settlements reaching as much as £20 million.

Lord Whitty said: “International organisations such as the Organisation for Economic Co-operation and Development have called for governments to focus on the economic cost of road crashes and move road deaths ‘towards zero’.

“The strategies of leading countries in road safety have changed and Britain must adopt a ‘towards zero’ goal and design, plan and legislate in a way that will put safety on our roads on the same footing as safety in the air, sea or on rail.”

In addition to measures on AEB and safety ratings, the RSF’s seven-point plan recommends that the Government should develop a ‘towards zero’ strategy, look at the financing of road safety programmes and establish an independent road safety inspectorate.

The RSF report, which was commissioned by insurer Ageas UK, also suggests the Government should consider establishing a long-term national goal to raise the safety of ‘A’ roads to a minimum three-star level.

Most ‘A’ roads achieve only a one- or two-star infrastructure safety rating, while motorways typically achieve a three- or four-star rating, but have widespread problems with run-off protection.

Work by the RSF has shown that the rate of motorway deaths and serious injury from run-off crashes doubles on sections where protection is inadequate.

Dual carriageways commonly achieve a three-star rating, but have problems with both run-off protection and safe junctions. Dual carriageways have double the rate of serious crashes seen on motorways.

RSF reports have provided the basis of new legislation or Government policy in the past and Labour peer Lord Whitty believes it should happen again.

“The Government should adopt the ‘towards zero’ goal of advanced nations,” he said. “It should help business, families and Government departments make road safety pay.”