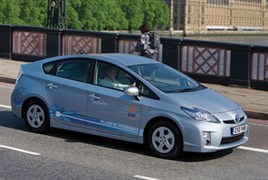 The Toyota Prius is the fastest used car off the forecourt for December, according to Glass's.

Chevrolet (perhaps surprisingly following its withdrawal from the UK market) also has two models in the 'Hot Five' while, at the other end of the spectrum, Renault's Scenic remains the most difficult used car to sell.

Rupert Pontin, Glass's head of valuations, said: "There are now more Priuses available in the market but demand remains strong both from private buyers and business, with many starting to be used as taxis."

"The Cruze and Orlando are both great value for money but Chevrolet's withdrawal from the UK market could be part of the reason for their appearance in the 'Hot Five', thanks to low levels of availability and therefore increased desirability.

"The Audi Q3 is coming of age in used market terms with increased numbers reaching the market. It offers comfort, looks, ability and excellent build quality from a very strong brand."

Pontin added: "The Renault Scenic can be a great car so long as you can find a reliable example with a genuine odometer and great service history - but that is a bit like finding a needle in a haystack."

"It is a shame to see the Vauxhall Cascada in this position because it looks good and drives well. Unfortunately, there are just too many in the market at unrealistic prices and most of its rivals do all the important things just a little bit better."