Tuffnells make the most of extra-long Sprinter 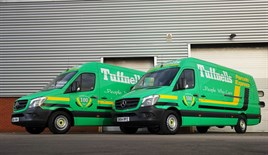 The first 22 Sprinters are finished in a modified version of Tuffnells’ familiar ‘Big Green Parcel Machine’ livery, which highlights its 100 years of operation. Supplied by dealer Enza, all are 313 CDI models with advanced 129 hp engines driving through smooth 7G-Tronic automatic transmissions.

Despite the fact that their high-roofed, Extra-long bodies offer huge, 4.8 metre-long cargo areas, the front passenger seats have been removed, allowing the vans to carry even longer items – one of Tuffnells’ biggest customers manufactures blinds up to six metres in length.

The Sprinters will be maintained within the manufacturer’s franchised network under a comprehensive CharterWay contract hire agreement from Mercedes-Benz Financial Services, which includes replacement tyre cover.

He said: “We conducted a lengthy evaluation process which entailed trialling various demonstration models in the Midlands, Yorkshire and Scotland. If our new vans perform as well as those we tested, and the dealer support meets expectations, Mercedes-Benz will be in a strong position during our van tender process for 2015.

“Reliability is crucial to our operation and I am confident that with its market-leading build quality and a Dealer network that’s geared-up to service and repair our vehicles outside normal working hours, the Sprinter is the right vehicle to take Tuffnells forward into its next 100 years.”

He continued: “The contract hire package was competitively priced and we had some very positive feedback from those drivers who tried the demonstrators – they liked the Sprinter’s performance and handling, while more than one reported the experience as being more like driving a car than a van.

“As a company that’s always conscious of its Duty of Care responsibilities to staff and other road-users, we’re also delighted to be investing in what is widely recognised as the safest light commercial vehicle on the market.”

Morton added: “The Mercedes-Benz team have handled this process in an exemplary fashion. I’ve had some good conversations with Steve Bridge (managing director for Mercedes-Benz Vans in the UK) while his strategic account manager Wayne Ousby and Enza’s fleet van sales executive Andy Armitage have been both proactive and supportive. In terms of customer care, I can’t fault them.”