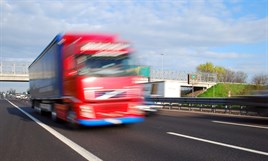 The majority (81%) of drivers do not know that the speed limit for lorries on single carriageway roads is 40mph, increasing the risk of road rage and accidents, warns AA DriveTech.

The findings come ahead of the 80th annivesary of driving licences for lorry drivers (16/02) being introduced.

Knowledge of the correct speed limit for lorries on single carriageway roads was highest among Scottish drivers (40%) and lowest among those in Northern Ireland (14%).

Men had a slightly better than average knowledge of the correct speed limit than women (21% compared to 15%).

Drivers in managerial or professional roles were the least (16%) able to identify 40mph as the correct speed limit for lorries on single carriageway roads.

Lack of knowledge of speed limits for other vehicles can cause problems and frustrations on the road.

Proposals to raise the speed limit for lorries on single carriageway roads to 50mph have been consulted on by the Government, although no change has yet been implemented.

Part of the reason for investigating this was to reduce the build up of traffic travelling behind lorries travelling at 40mph.

The same research also highlighted a worrying 1% of drivers who, on approaching a two lane roundabout at the same time as an articulated lorry, would speed up to try to beat it around the roundabout.

A cautious 7% of drivers said they would avoid entering the roundabout entirely until the lorry had exited it.

Jim Kirkwood, managing director of AA DriveTech, said: “Many drivers say they feel intimidated by lorries. But, this research highlights how a lack of understanding of the laws surrounding lorries, and how best to drive around them, could be contributing to this.

“Drivers who find themselves frustrated because they are stuck behind a lorry they perceive to be going slowly need to remember that there are different speed limits for different vehicles.

“Professional lorry drivers have been required by law to hold a special licence for 80 years; highlighting the specialist skills needed to drive large vehicles safely and legally.

“As an industry we need to ensure that we continue to uphold the highest standards and the upcoming Driver CPC deadline should ensure all drivers and fleets get their training in order.”

To stay within licensing laws, all lorry drivers are required to do 35 hours of Driver CPC training every five years.

This training ensures drivers’ skills are kept up-to-date and means they keep their Driver Certificate of Professional Competence, which is a legal requirement.

The deadline for lorry drivers with acquired licence rights to complete this training is September 10, 2014.