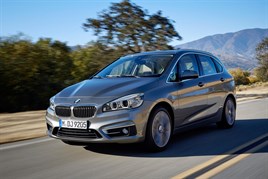 BMW has shown the new 2 Series Active Tourer, which introduces front-wheel drive and three-cylinder engines to the range.

Available at UK dealers from late September, the first versions will be the 218i and 218d, the former a 136hp turbo-charged three-cylinder petrol engine with preliminary fuel consumption test figure of 57.6mpg and CO2 emissions of 115g/km, while the latter produces 150hp and achieves 68.9mpg and 109g/km.

In the UK, the higher-power 225i will go on sale with xDrive four-wheel-drive from November, alongside further models: a BMW 220i, 216d, 220d and 220d xDrive Active Tourer. 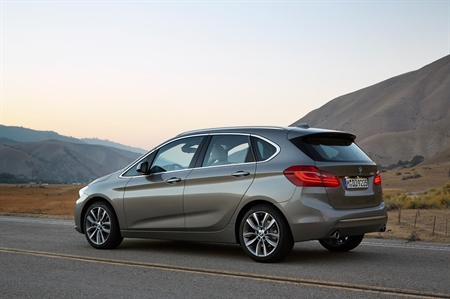 The standard transmission is a newly developed six-speed manual unit. Optionally, in conjunction with the three-cylinder engine, a six-speed automatic transmission can be specified.

For the four-cylinder engine, a new eight-speed automatic transmission has been developed, which is specially adapted to take account of the front-wheel-drive configuration and the transverse engine.

All transmissions feature start-stop, while the automatic versions further improve vehicle efficiency with a coasting function.

In addition to the entry level version Sport, Luxury and M Sport models will be offered in the UK. The Sport model places the emphasis on the dynamic side, while the Luxury model is more about comfort. 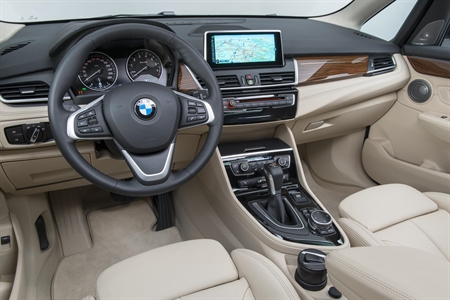 The luggage compartment can be enlarged from 468 to 1,510 litres, with a flat loading floor, and the 40/20/40 split-folding rear backrest fitted as standard. The car also has  sliding rear seat, allowing either knee room or luggage space to be increased as required, and its backrest can be adjusted to recline for the three rear seats or sat more upright for extra luggage space.

There is a storage compartment under the boot floor. 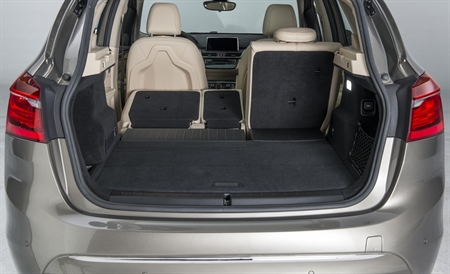 BMW will offer full colour head-up display (optionally available as part of the media package – Professional Plus). The information is shown on a screen that extends out between the steering wheel and windscreen, enabling drivers to view all key information without having to divert their attention from the road.

The BMW 2 Series Active Tourer features the new Pedestrian Warning with City Braking function, which significantly improves pedestrian safety in urban environments. If the system detects a pedestrian or a stationary vehicle, it emits an audible and visible signal to warn the driver, and primes the brakes. If the driver fails to react, the system acts autonomously to reduce vehicle speed.

Via the electromechanical steering system, the Parking Assistant takes charge of steering, leaving the driver to focus on accelerating, braking and switching between forward and reverse gears.

Optional bi-LED lights are available for the dipped and main beam functions. These lights are as bright as comparable xenon systems with LED daytime running light rings, but only consume half as much energy. LED technology is also used in the cornering lights, which provide sideways illumination both when making a turn and also when cornering at speeds between 25 and 44mph.