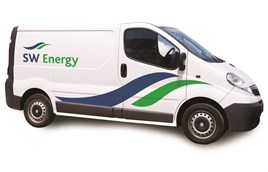 SW Energy, who manage community energy, billing and metering services for high-end residential and mixed developments in London, Liverpool and Manchester, have introduced the MileageCount system on its fleet.

SW Energy uses MileageCount Ultimate, the most sophisticated of the three system options, in association with GPS dongle tracking. Each of the company’s engineers has their own GPS dongle, which plugs directly into the cigarette lighter socket of their van. When appropriate, they then remove the dongle and plug it into their laptop for all their journey details to be downloaded. This downloading can be performed every month, every week or even after every journey. Each journey is recorded using satellite tracking, accurate to within a few metres.

Senior operations manager Chris Kelly said, “We started to implement MileageCount in July, with the full live switchover from the previous manual systems in September. With such a powerful system representing a quantum leap from how we managed previously, we appreciated the comprehensive support during the initial learning curve. Now, it is no exaggeration to say that we would not be without it.”

Scott McCullow, Fuel Card Group account manager for SW Energy, said, “There were a few minor teething troubles as we brought their engineers and managers up to speed with MileageCount, as there would be with any new system. These were quickly resolved, though, and we are delighted that the system is more than living up to its promises for SW Energy.”