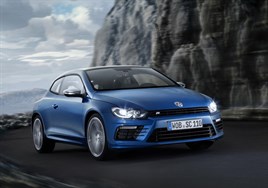 A revised version of Volkswagen's Scirocco coupé will be shown at the Geneva motor show, 40 years after the original made its debut.

The latest version gets a new range of advanced engines that offer up to 280hp yet also promise fuel efficiency improvements of up to 19%.

Main visual differences with the current model include new headlights and rear lights, as well as revised bumper styling.

The revised front bumper features aerodynamic ‘blades’ in the outer section, like those of the latest-generation Golf GTI, with integrated indicator lights, daytime running lights and fog lights.

On models fitted with the optional bi-xenon headlights, the daytime running lights are LEDs within the main headlights. At the rear, all Sciroccos now have LED tail lights, while the bumper has been reshaped to appear lower and more purposeful.The Volkswagen logo badge now has an additional purpose: functioning as the tailgate release handle.

The petrol range consists of a 1.4-litre petrol with 125hp (previously 122hp), a new 2.0-litre 180hp unit which replaces the previous 1.4-litre 160hp unit. Despite the increase in capacity and power, it is more economical than the unit it replaces.

Two diesel engines will be offered, both 2.0-litre units, with either 150hp or 184hp, and economy of up to 68.9 mpg. Depending on power output both petrol and diesel engines come with a choice of six-speed manual and six- or seven-speed DSG gearbox.

Inside, the dashboard has been updated, with new-look dials and an auxiliary instrument cluster above the centre console, consisting of chronometer, charge pressure and oil temperature gauges – a tribute to the 1974 model.

The Scirocco opens for ordering in the UK in May, with first deliveries expected in September.  More details will be available closer to launch.