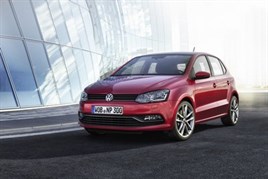 Volkswagen has unveiled the all-new Polo, which will make its public debut at the Geneva Motor Show in March, before arriving in the UK in July.

All new Polos will be equipped as standard with an automatic post-collision braking system which automatically brakes the vehicle after a collision to reduce kinetic energy significantly and thus minimise the chance or consequences of a second impact.

Volkswagen's modular infotainment system already used in the latest Golf, is being introduced across the Polo range. The touchscreen system includes a proximity sensor and a function that reacts to wiping movements by the fingers (as used on smartphones).

The revised Polo will feature a range of new Euro 60-compliant engines offering fuel efficiency improvements of up to 21% over the old units.

There are two 1.0-litre petrol units, with 60 or 75hp and two 1.2-litre four-cylinder TSI engines with 90 or 110hp. A 1.4-litre TSI engine with cylinder deactivation (ACT) will be available, but with power increased by 10hp to 150hp compared with the outgoing car.

A range-topping Polo GTI with increased power will be available next year.

Diesel power is provided for by two new three-cylinder 1.4-litre TDI engines (previously these were 1.2 and 1.6 litres), with 75 and 90hp.

Exterior changes are subtle and it is difficult to tell the new model apart from its predecessor at first glance. Optional LED headlights are a first in the class.

Inside, the driver faces wholly redesigned instruments and a new steering wheel, while a refreshed centre console with new heating and ventilation controls ensures ease of use.

Full details will be available when the new Polo opens for ordering in the UK in April.