New Audi A6 Ultra has company car appeal at 114g/km

Was this article useful?
17 people found this useful 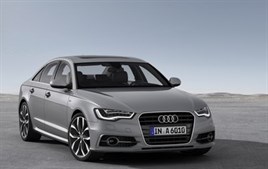 A new range of Audi ‘Ultra' models will be spearheaded in the UK by the new A6 Ultra, which will offer emissions of 114g/km and a benefit-in-kind tax bracket of 17%.

The new TDI-based model is the result of the pursuit of efficiency, but without any sacrifice in performance, achieving 0-62mph in 8.2 seconds and top speed 144mph.

Audi board member for development, Prof. Dr. Ulrich Hackenberg said: "The latest TDI technology, ultra-efficient transmissions, advanced exhaust after treatment - customers will hardly see anything, but they'll notice the effects of powerful acceleration and, thanks to extremely low fuel consumption, when paying at the gas station.

Power for the Saloon and Avant-based A6 TDI ultra variants is provided by a new 2.0-litre diesel engine that supersedes the existing 177PS unit and complies with forthcoming EU6 emissions regulations.

At launch in the UK the new unit is linked exclusively to a completely redesigned seven-speed S tronic twin-clutch transmission, which replaces the eight-speed multitronic CVT in four-cylinder models.

The gains in terms of performance and everyday driveability made by the new engine and transmission are significant enough, but they are outweighed by the far-reaching financial benefits of improvements to fuel economy and reductions in CO2 output of up to 14%.

“This measure means that the new ultra models will of course meet the future Euro 6 emission standards while achieving lower fuel consumption."

Combined economy and emissions in the new A6 2.0 TDI Ultra with the seven-speed S tronic transmission show the most impressive improvement, with up to 64.2mpg delivered along with CO2 output of just 114g/km (2.0 TDI 177PS multi-tronic 56.5mpg, 132g/km). Similarly equipped Avant models offer up to 61.4mpg with 119g/km (outgoing equivalent 55.4mpg, 135g/km).

The emissions performance of the newcomers ensures that although recommended retail prices for the TDI ultra 190PS S tronic versions are identical to their outgoing TDI 177PS counterparts, their OTR prices are actually lower due to reductions in CO2-related Vehicle Excise Duty rates.

Costs make a further downward shift for business users. Benefit-in-kind liability for drivers of the A6 2.0 TDI with the new 190PS ultra engine and new S tronic transmission, for example, falls from 21% in the outgoing version to 17%.

This equates to a total annual charge for a 40 per cent tax payer of £2,380 - the lowest liability for a conventionally powered premium executive class car.

It has also been achieved without need for any restriction on equipment. Like all A6 engines the new 190PS 2.0 TDI Ultra unit can be paired with SE, S line and Black Edition specification, meaning its improved performance can be enjoyed along with alloy wheels of up to 20 inches in diameter, with the popular S line body styling additions and with every other infotainment feature, driver aid and comfort-enhancing option available for the rest of the range.

Subtle ‘Ultra' badging at the rear will mark out the most efficiency-focused A6 models, all of which will share the core A6 specification common to the range as a whole.

Later this year the new A6 2.0 TDI Ultra will be followed in the UK by Ultra versions of the A4, A5 Coupé and A5 Sportback with CO2 emissions of as little as 104g/km.

For more on Ultra and what James Douglas, head of fleet at Audi UK, thinks about this step change in emissions, read this week’s Fleet News.