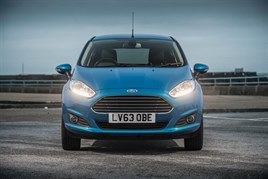 Ford has beaten overall market growth and increasing sales and shares of its cars and commercial vehicles, compared with January 2013.

Ford has also significantly extended its sales lead over its nearest rival, according to official sales figures from the Society of Motor Manufacturers and Traders (SMMT).

Ford's car market share in January was 14.1 per cent, 0.4 of a percentage point up from the same month in 2013 and 4.5 percentage points of share ahead of its nearest rival.

Ford Fiesta and Ford Focus were the number one and two best sellers in January with the Fiesta notching up 9,072 registrations, more than double its nearest non-Ford rival.

UK commercial vehicle sales were up 3.5 per cent, compared with January 2013.  Sales of Ford commercials in January were up 14.3 percent at 5,020 registrations, compared with the same month last year, with share up from 22.2 to 25.3 per cent.

Mark Ovenden, Ford Britain chairman and managing director, said:  "Ford's fast sales start to 2014 builds on the momentum sustained through 2013 and is a direct result of the continued investment in exciting products and industry-leading technologies.

"More people, and more private buyers, choose Ford over any other vehicle brand and we will build on this popularity with a range of new products planned for this year - and with outstanding service offered by our dealer partners across the UK."

Last month, Ovenden said the retail market was "most important" for Ford, and key to its 2013 growth.