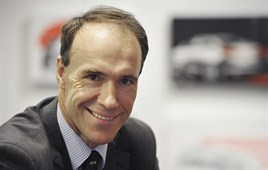 Kia is launching a brand new rental programme through its dealer network after partnering with White Clarke Automotive Solutions.

A pilot scheme, which will involve several dealerships, will be launched in the first half of this year. If successful, the programme will be expanded.

John Hargreaves (pictured), head of fleet and remarketing at Kia, believes launching the rental initiative will offer several benefits to the brand.

He said: “It’s hard to quantify, but we would expect a positive effect in terms of retail and fleet market share.

“It will also increase the choice of own brand replacements when vehicles are off the road and offer dealers an additional profit opportunity. In addition, it will offer local customers an alternative channel to the traditional rental companies for small volumes of rental vehicles.”

Similar dealer rental programmes have been launched by other manufacturers, most notably Ford, which began its scheme 12 years ago.

Hargreaves told Fleet News that Kia is not intent on building a programme on the same scale as Ford’s.

Instead, participating dealers will initially allocate between 10 and 20 vehicles to the rental fleet, with the possibility of growing this further in the future.

White Clarke Automotive Solutions, which co-ordinates the Ford programme, is also providing the technology and support for Kia’s scheme.

Pam Halliday, sales director at White Clarke Automotive Solutions, told Fleet News that it is the only outsourced provider of this type of programme.

She said: “We provide the people, the system and the centralised billing to give an end-to-end dealer-based rental solution. It’s a great way of getting people into dealerships and essentially gives you a paid-for test drive.”

Halliday added: “In addition, we will provide a dedicated programme manager, whose job it will be to go around participating dealerships and help drive local businesses towards the rental scheme.”

The plan has been in the pipeline for the past 18 months. Hargreaves said: “We have spent a long time on the feasibility of the scheme and in selecting the right partner, but we’re now looking forward to launching it.”

It was the best set of sales figures for the Korean brand and, despite the drop in fleet registrations, closer analysis actually painted a positive picture.

An increase in public sector sales saw Kia’s performance in this sector rise from virtually zero in 2010 to more than 2,500 cars in 2013, while Kia’s contract hire numbers rose from 509 to 2,965 in the same period.

Sportage, Ceed and Rio all performed strongly, accounting for more than 12,000 sales in 2013.

Hargreaves said: “Increasing business sales through our network has been central to our plan over recent years and we are now seeing a very strong return from that strategy.

“We took a decision to carefully manage our sales into the big fleet channels such as daily rental and Motability and we have provided support for our dealers to help them understand and maximise the local business possibilities and to compete effectively. Overall, that means we saw a 37% increase in this area of business during 2013.”

That has meant an increase in business registrations via the dealer network from just below 3,100 in 2010 to more than 14,000 vehicles last year. That represents a market share of 2.7% – excluding daily rental, Motability and demonstrators.

Hargreaves said that one major area of success for dealers has been in sales to companies in the small and medium enterprise sector – where cars are bought very much in the same way as retail cars. That performance increased by 30% in 2013.

Kia is targeting continued growth in these channels in 2014 to further focus profitable and sustainable business through the dealer network.

However, centrally negotiated large fleet business will still be managed and handled by Kia centrally to both ensure an appropriate presence in those markets and to protect residual values.