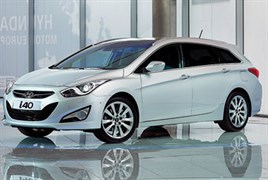 The Hyundai i40 was the fastest selling used car last month, taking an average of 28 days to sell, according to Glass’s.

It is followed in second and third place by the Audi Q3 and Audi S3, taking 31.1 and 31.2 days to sell respectively.

So what does this month’s top 10 say about whats going on in the UK used car market?

"I wouldn’t have expected to see Hyundai in in quickest sellers, but the 140 is incredibly good value for money and it seems that retail promotions have created quite a demand for the car – this has led to stock levels dropping, demand increasing and days to sale improving quickly.

“Audi takes three of the top 10 spots, which isn’t unexpected – it just confirms the popularity of the brand in the new and used markets.

"What is interesting is that Audi’s main rivals, Mercedes and BMW, are conspicuously absent from the top ten and even the top 20 sellers.”

And is the recent speight of good weather having an impact?

“Not quite yet,” said Pontin. "But I think that will change in the next month or two. However, we do only have three 4x4s in this month’s top ten compared to eight last months, so the pattern is changing and I’m sure if we see the sun over the next four to six weeks, convertibles will start to show as faster sellers.”

This month’s worst performing models shows a list made up of many different manufacturers for the first time in many months.

“The R-Class remains the slowest selling car in the UK and trade values are falling as the market tries to find a demand point for these very competent cars – being six rather than seven seats does not help.

"I’m surprised to see the Mitsubishi Mirage in the slowest sellers list – small cars should be moving quickly in today’s market, but rumour has it these are in plentiful supply with strong deals in new cars drawing business away from the used car markets.”