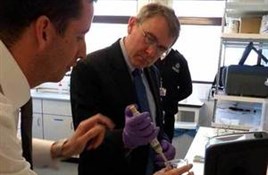 The Government’s plan to create a new drug drive limit has moved a step closer following the results of two public consultations.

The recommended limits for 16 different drugs have now been approved and will see eight generally prescription and eight illicit drugs added into new regulations that will come in to force in autumn 2014.

The new rules will mean it will be an offence to be over the generally prescribed limits for each drug and drive vehicle, as it is with drink driving.

Road safety minister Robert Goodwill said: “The results of the consultation are sending the strongest possible message that you cannot take illegal drugs and drive.

“This new offence will make our roads safer for everyone by making it easier for the police to tackle those who drive after taking illegal drugs. It will also clarify the limits for those who take medication.”

The new rules will mean it will be an offence to be over the generally-prescribed limits for each drug and then drive a vehicle, as it is with drink-driving.

It had been proposed to set the amphetamine level at 50mg, but the Government said there had been "significant concerns" on the limit.

The amphetamine level was now being reconsidered so that patients who take medicine for attention deficit hyperactivity disorder are not affected.

The prescription drugs for which limits have been set include morphine (80mg) and methadone (500mg).

The next step is to take these limits to Parliament to see the offence come into force later this year.

In March 2013, the department took expert advice from a medical panel on the potential drug limits that the Government should consult on.

The department accepted most of the recommendations made by the panel and has consulted on limits that are a ‘zero tolerance’ approach to deter people from taking drugs and driving.

The limits to be included in the new regulations are not set at zero as drugs taken for medical conditions can be absorbed in the body to produce trace effects.

It is also important to recognise that different drugs are broken down at different speeds and that is reflected in the disparities between the limits.

Therefore the limits to be included in the new regulations are:

In the meantime the government is working closely with the medical profession to ensure healthcare professionals and patients are informed about the new drug driving offence.

Later this year will also see the start of a wider communications campaign to make sure everyone that drives knows about the new changes to the law.