Bosch brings the internet into the car 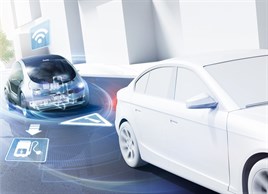 Bosch has revealed its plans to help the internet revolutionise the car over the next few years.

It is making cars an active part of the internet and bringing drivers a range of benefits.

"A connected car is always going to be a better car," says Wolf-Henning Scheider, the member of the board of management of Robert Bosch GmbH with responsibility for the Automotive Group.

Making the internet part of the car

MySpin is a system that integrates iPhones and Android smartphones fully into the vehicle, with the phone's display appearing on the vehicle's main display.

This makes using apps in the vehicle much easier, safer and more convenient.

Bosch is also bringing the internet into the car without the help of mobile phones.

Today's navigation systems can, for instance, find you a French or Italian restaurant.

Future Bosch services will save drivers of electric vehicles the trouble of looking for charge spots by guiding them directly to the nearest available one, as well as letting drivers reserve the nearest parking space and guiding them to it.

Bosch is connecting the powertrain to the internet. It has been offering eHorizon for commercial vehicles since 2012 as a way to smooth journeys out and reduce the amount of unnecessary acceleration and deceleration.

For example, when this navigation software sees that the current two-kilometre downhill stretch of road leads to a built-up area, it can tell the vehicle to enter its most fuel-efficient mode or to charge the battery. This helps drivers save up to 15% of fuel.

Making the car part of the internet

In connecting vehicles to the cloud, Bosch sees data protection as a fundamental requirement. To this end, Bosch subsidiary escrypt is developing security solutions that are tailored specifically to cars, such as standalone encryption.

Vehicles will in the future become sensors in their own right, gathering information about their surroundings and exchanging them with each other or with a server.

Known as floating car data, this information is required both for highly dynamic maps and to improve vehicle safety.

Whereas the driver sees no more than a bend ahead, the navigation system is already aware that just beyond it is a patch of ice or the tail end of a traffic jam.

Vehicles already communicate with the outside world, for example with the eCall service, which will be mandatory in the European Union from 2015. W

hen accidents occur, vehicles will automatically call the emergency services, with the call activated by the same sensors that trigger the airbag.

This can reduce the time it takes for emergency crews to reach the scene by 50% in rural areas and by 40%in urban areas.

or instance, engine data from diggers or wheeled loaders can be sent to a database, analysed, and compared with a constantly growing archive of data from similar vehicles under similar stresses. In the future, this type of functionality could also feature in passenger cars.

Making the car part of 'the internet of things'

An entire metropolis, infrastructure included, could be networked to guarantee optimum mobility.

Bosch software platforms already manage the infrastructure for major electromobility trials. One example is Hubject, the roaming system for charge spots, which allows customers to charge their electric car at charge spots belonging to various companies and pay conveniently via their normal electricity bill.

Another is Truck Secure Parking, an online booking service for truck parking spaces along motorways. All the spaces feature video surveillance and are networked with a Bosch call center, which guarantees safety for drivers and freight.

Customers and car companies around the world are getting to grips with how to network the car. Automated, connected vehicles can for instance improve traffic flow by 80%, or guarantee safe, comfortable mobility for older people.

Studies suggest that the number of road traffic fatalities could be reduced by up to 90% as vehicles become progressively more automated.