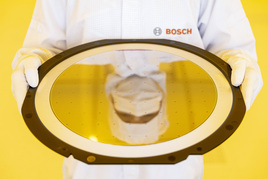 Bosch has opened a €1 billion (£860m) semiconductor fabrication facility in Dresden, Germany – the largest single investment the company has ever made.

Production in Dresden will start as early as July – six months earlier than planned, with the first semiconductors made in the new plant to be installed in Bosch power tools.

With the automotive sector facing a global semiconductor shortage and fleets facing increased SMR costs and lead times due to the microchip crisis, Bosch says that the new factory will be an important part of the semiconductor manufacturing network.

Harald Kroeger, Bosch board member with responsibility for the Mobility Solutions, says automotive microchips are the “ultimate discipline” in semiconductor technology.

“This is because in cars these small building blocks have to be especially robust,” he explained. “Nowhere else are they subjected to such strong vibrations and extreme temperatures.”

However, chairman of the board of management of Robert Bosch GmbH, Volkmar Denner, stressed that the new semiconductor factory would not solve the chip shortage, but would help "contribute" to the increasing demand.

“We can provide some help, but we certainly cannot resolve that overall shortage,” he said.

Bosch says the semiconductor shortage could last well into next year.