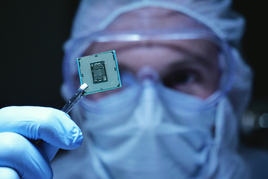 End-user fleets, the leasing industry and daily rental companies have also been warned that the semiconductor shortage could stretch into next year.

“There may be challenges getting hold of some models, trim levels or equipment,” Matthew Walters, LeasePlan UK

Ford was among the first auto motive companies to highlight the potential impact of chip availability on first quarter production, earlier this year.

“The global semiconductor shortage is affecting automakers around the world as well as other industries, including consumer electronics companies,” a Ford spokesman explained.

“Ford is concentrating on how to best use our allocation of semiconductors to deliver high-demand vehicles to customers.”

The manufacturer has reported it could lose half of all planned production in quarter two of 2021.

The factory in Turkey that builds the Ford Transit for the European market has been closed until June 13.

The Focus production line in Germany will be on limited production for much of next month, while closures of varying length will impact Galaxy, Kuga, Mondeo, S-Max and Transit Connect production until July 31.

Closures will also impact the Fiesta and Puma production lines in Germany and Romania respectively, although to a much smaller degree.

The Ford spokesman said it was looking at a number of factors to manage the chip shortage, including overall consumer demand by nameplate, the individual vehicle’s contribution to its fuel economy commitments and its ability to make up for the short-term production loss later this year.

Despite this, vehicle manufacturers are relatively small customers, collectively accounting for less than 10% of the £250 billion of semiconductor sales each year.

“Our EVs are going to arrive around three months later than expected,” Steve Winter, British Gas

Stellantis – parent company of the merged PSA and FCA Groups – saw eight of its 44 global plants idled at some point in Q1, with production losses due to chip shortages down around 190,000 units or 11% of planned output.

A Stellantis spokesman told Fleet News that due to increased demand for the Vauxhall Vivaro, Citroën Dispatch and Peugeot Expert, it had introduced a third shift at its Luton plant, but semiconductor shortages were resulting in longer delivery times than usual for sold orders, with some “unpredictability”.

However, he stressed: “We manage each sold vehicle order carefully to minimise any delay as much as possible for our customers, and our teams will keep our customers as fully informed as possible through to their delivery.”

The manufacturer has cut options on vehicles in some cases, with digital instruments on the current Peugeot 308 being replaced by analogue, while on certain Citroën models, the optional wireless phone charging is temporarily unavailable.

The Volkswagen Group – parent company of VW, Audi, Škoda and Seat brands – acknowledged that the shortage is leading to “bottlenecks” in production.

A spokesman said it has been working “intensely and successfully” to minimise the effects of the shortage on production. However, he said: “We currently assume that the supply of chips will continue to be strained in the coming months.”

Mercedes-Benz, meanwhile, said it is assessing the situation on a “continual basis” in close coordination with its suppliers and confirmed that vehicle deliveries of certain models may be affected.

The Association of Fleet Professionals (AFP) recently warned that measures may need to be adopted by fleets to cope with the emerging shortage of semiconductors disrupting car and van production.

AFP board member James Pestell told Fleet News: “We’re seeing an extension of the lead time period across most manufacturers.

“Where we were seeing a typical lead time of three months, which was the industry average, we’re now seeing that extend to six-to-nine months-to-a-year across cars and light commercial vehicles.”

Steve Winter, head of fleet at British Gas, which, with its parent company Centrica, operates 12,000 vehicles, is experiencing delays for both cars and vans.

Vehicles in the past which had a lead time of six months or more would not feature on its company car scheme. Now six months is becoming the typical lead time, Winter said.

Lease extensions are being employed in some cases, with the fleet incurring the related costs that entails, while delays are also impacting its electrification plans.

It bought 1,000 Vauxhall Vivaro-e vans last summer and signed a deal for a further 2,000 of the electric vans at the start of the year.

“Our EVs are going to arrive around three months later than expected,” Winter said. “The build volumes are being reduced. We were on around 200 a month and we’re probably down to around 150 now.”

The knock-on effect for British Gas is it is running vehicles that are six years old into a seventh year, which will impact maintenance costs.

Vans will also require an additional MOT and, with van residual values at record levels, it will potentially miss out on profits shared on sale price.

It is a similar story for Matt Hammond, head of fleet at Altrad. He said: “Orders placed in Q3 2020 which we expected to see on fleet early 2021 are just now starting to filter through. This has been the case for Peugeot, Ford and Nissan light commercials.

“This delay has also seen an impact on aged replacement hired vans as the rental companies are also struggling to secure new stock, meaning we have had to retain vans for longer, extending our fleet age profile beyond our preferred guidelines.”

Enterprise says it is working closely with manufacturers to buy new vehicles, where available, but, as it buys the vast majority of its fleet ‘at risk’, it has the flexibility to hold or sell vehicles as needed.

A decline in demand at airport locations has also meant it has been able to transfer vehicles to other parts of the operation where demand is stronger.

A spokesman said: “We would urge customers to engage with us as soon as possible to discuss their requirements.”

Europcar Mobility Group UK claimed it has been able to manage supplies to meet customers’ needs without any significant impact. A spokesman explained: “We are currently on-boarding some new models for our Flex long-term rental solutions, which is actually helping some business customers address supply issues they may be facing for their own businesses.

“We also have flexibility to retain some vehicles in our fleet for slightly longer to accommodate any delays in new vehicle supply without any detriment to the customer experience.”

Reflex Vehicle Hire told Fleet News that it was constantly liaising with dealer groups to identify pools of stock that come available within the network.

“We recognise the struggle for vehicle availability and, if it’s commercially viable, then we will take these opportunities to secure this stock,” said a spokesman.

“Whereas in the past our business has managed and succeeded to fulfil customer requirements and demands at the drop of a hat, this has proved challenging this year due to the lack of dealer network stock.”

Having anticipated the issue in its build slot allocation from core manufacturers, it pre-loaded the start of the year. However, he said: “We have had to extend our range of suppliers, take alternative models and slow our disposal programme significantly.

“Continuity of supply at familiar levels are potentially unlikely to return until 2022, with multiple manufacturers now indicating their order banks on certain models are more than 150% higher than that of previous years,” continued Ridley.

“The backlog of orders, coupled with the component shortage and operating restrictions relating to social distancing, will hinder their ability to achieve previous lead-times for the foreseeable future.”

Northgate says it is also working closely with customers and its OEM partners to mitigate the impact.

The leasing industry, like rental providers, is working with fleets to manage the problem. LeasePlan UK head of consultancy services and customer value Matthew Walters said: “We are advising that fleet managers plan ahead and look ahead at vehicle procurement this year, while reassessing normal timelines for doing so.

“Fleet managers should also consider alternatives where possible, as there may be challenges getting hold of some models, trim levels or equipment.”

“Traditionally, corporate customers used to factory order all vehicles, but we’re now moving to a place where a vehicle in stock means that the customer can access it almost immediately, with some compromises made on bespoke optional extras.”

Simon Staton, client management director at Venson, says it is putting some existing vehicles into formal extension and looking at reallocation of vehicles based on mileage, condition and age.

“Longer lead times, coupled with fleet replacement by the hire companies being delayed or reduced as they manage their fleet parcs in a Covid world, all adds to the complexity for fleet managers and how they satisfy the demands of their organisation,” he added.

Automotive lead at KPMG, Massimilano Messina, says that the semiconductor shortage is placing a “stranglehold on production”, read more here.

Join us to test drive the latest models and EVs, unaccompanied, in a real-world driving environment. During your visit you will have the chance to test drive up to 10 vehicles from a choice of hundreds of the latest electric, hybrid, and petrol/diesel vehicles.