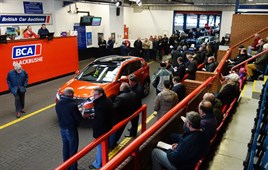 BCA’s latest Pulse report shows that the headline average value fell in February, compared to January, as used car volumes continued to rise during the month.  Despite this values remain ahead year-on-year and demand was strong across the board for good quality used stock.

There were small value falls in the fleet & lease and dealer sectors, while nearly-new values continued to decline from the record level seen in December.

BCA’s data shows that average values fell in February by £51 (0.7%) to £7,330, compared to the previous month.  Year-on-year, February 2014 was ahead by £274 or 3.8%, compared to the 3.4% year-on-year increase reported in January.   Both average age and mileage rose slightly over the month while average performance against CAP Clean improved by a point to 98.74%.

Simon Henstock, BCA’s UK Operations Director commented “Volumes rose in February and we expect to see that trend continue over the coming weeks.  The SMMT is forecasting a strong March and, as every new car sale typically generates a chain of used car activity, there will be greater volumes from fleet and contract hire sources as well as increasing numbers of dealer part-exchange vehicles."

“Feedback from main dealers suggests they are expecting a busy March and April, which in turn will generate a significant rise in volume through remarketing channels.”

He continued “Even though we are reporting some pressure on average values, used car demand remains very strong, particularly for retail quality vehicles.  However, as volumes rise, the supply and demand dynamics of the market will change and sellers should be planning for this with their remarketing partners.   As always, the best cars will continue to sell well, but for vehicles that are in poorer condition, lower spec or higher mileage it is vital they are valued to sell in line with market sentiment.“

“Sellers should consider pre-conditioning vehicles to sell first time, if necessary using Smart Prepared techniques to make sure their cars look ‘retail ready’ when they are offered for sale.  Post-Easter values have typically dropped in previous years and sellers should avoid ‘chasing’ the market with stock that appears over-valued.”

Fleet & lease cars averaged £9,191 in February, a fall of just £27 compared to January, which was one of the highest months on record.  Values were up by £340 (3.8%) year on year.   CAP performance improved by a point over the month to 98.64% and was broadly static year-on-year.  Retained value against original MRP (Manufacturers Retail Price) was up half a point at 43.05% compared to January and was up by a similar degree, year-on-year.

Average dealer part-exchange values have been broadly static since October last year and fell by just £33 (0.8%) in February.  Year-on-year, values were ahead by £241 (6.7%) compared to February 2013 with average age rising and mileage static over the year.  CAP performance improved to 97.54% in February, up one point compared to January.

Nearly new values fell for the second month running, down to £20,286 from £21,183 in January, but volumes remain very low and model mix remains the most significant price factor.