Calls for EU to move faster to reduce road deaths 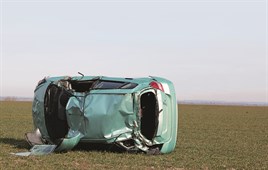 Transport safety campaigners are calling on the European Union to accelerate progress on reducing the number of people killed in cars every year in the EU, as new research shows 12,345 car occupants were fatally injured in 2012.

The report into trends in car occupant safety, published by the European Transport Safety Council (ETSC), found that 900 lives could be saved every year in the EU if car manufacturers were required to fit seat-belt reminder sensors to front and rear passenger seats to help prevent deaths from failure to wear belts.

It also highlighted the UK as one of the best performing countiries in Europe.

Despite improvements in vehicle safety, drink driving and inappropriate speed are still contributing to many deaths on European roads. The ETSC estimates that 5600 deaths, half of them in cars, could be prevented annually by eliminating drink driving and a further 1300 if the average speed on all roads was cut by just 1km/h.

The ETSC is calling on the EU to mandate the use of alcohol interlocks for repeat drink driving offenders and for better enforcement of speed limits across all member states.

Antonio Avenoso, executive director of the ETSC said: "While huge progress has been made in cutting the number of people killed in cars on Europe’s roads it is simply wrong that 12000 still die every year for reasons that are mostly avoidable.

"Simple measures like seat belt reminders in front and rear passenger seats, better enforcement of speed limits, and measures to prevent repeat drink drivers from getting behind the wheel could put the EU’s target of halving the number of road deaths by 2020 firmly within reach."

Despite the large number of deaths still occurring, the report finds that existing measures have been very effective – and should be widened.

The report estimates that 8600 car occupants survived severe collisions in 2012 because they were wearing a seatbelt. The number saved each year by improved occupant protection, such as airbags and side-impact bars, built into cars is harder to estimate, but is clearly many thousands.

Spain and Latvia are highlighted by the researchers for having made particularly strong progress in cutting car occupant deaths. The introduction of penalty point systems was cited as being an important component in an array of measures taken to improve safety in those countries.

Countries with historically good performance including Switzerland, the Netherlands, the UK and Sweden have also managed to continue their good progress and are now the safest countries ranked in terms of car occupant deaths per billion vehicle-km travelled.

The report “Ranking EU Progress on Car Occupant Safety” is based on analysis of EU data overseen by a panel of 32 road safety experts from across Europe.