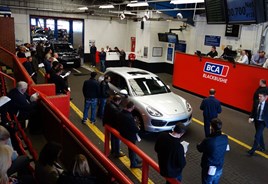 BCA’s latest Pulse report shows that the headline average value of a used car increased in April by £166 compared with March to £7,553 -  the highest monthly value this year and the second highest on record.

The average value for April 2014 bucked the trend of the past three years when significant falls were recorded during the month.

For the second month running there were value rises to record levels in the fleet and lease and dealer sectors and an improvement in nearly-new values.

BCA’s data shows that while average values improved in April by 2.2% to £7,553, compared to the previous month, average performance against CAP Clean fell by two and a half points to 95.77%, suggesting that sellers were being pragmatic about performance compared to guide values.

Simon Henstock, BCA UK operations director, said: "While average values continue to surge ahead, the market was much tougher in April than we have seen so far this year.

"Buyers were presented with greater choice as volumes rose and conversion rates came under pressure as a result. As in previous months, demand remains strong for the best quality retail cars but less attractive or poorly presented vehicles must be valued competitively and in line with condition in order to attract buyers and sell first time.

"The premium and luxury end of the market remains very strong with buyers happy to invest six-figure sums for the right vehicles.”

Henstock added that dealer part-exchange vehicles saw performance fall over three points down to 93.3%, with fleet/lease vehicles falling by a similar margin from 98.5% to 95.6%.

"With Easter typically representing a watershed in terms of demand, the market is now moving into a period over the summer months when we expect values to remain relatively flat," said Henstock.

"Families are now thinking about paying for their summer holidays, and we still have the distractions of the Football World Cup to come. History tells us these massive sporting events have notable if short-term effects on the retail sector and therefore impact on demand in the wholesale car market."

CAP performance fell by nearly three points over the month to 95.67% but was ahead year-on-year.  Retained value against original MRP (manufacturers retail price) fell  by nearly a point to 43.05% compared to March and was up by one point, year-on-year.

CAP performance fell back by three points to 93.30% in April, and was marginally down compared to April 2013.  Nearly new values improved for the second month running, rising to £20,934, an increase of £619 over March.