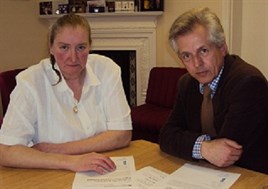 Richard Graham, MP for Gloucester, has been given a national road safety award by the charity Brake and Direct Line Group for his campaign for tougher sentences for disqualified, unlicensed and uninsured drivers who kill and injure.

Richard started his campaign in 2013 after his constituent Paul Stock was run down and killed by disqualified and uninsured motorcyclist Graham Godwin. Despite having multiple previous driving convictions, Godwin could only be sentenced to two years in prison - the maximum for causing death by driving while unlicensed, disqualified or uninsured.

Paul's widow, Mandy Stock, wrote to Richard, calling for a change in the law to allow judges to hand out higher sentences. She argued that sentences should better reflect the devastation caused by drivers who kill when they have no right to be on the road, echoing Brake's Crackdown campaign.

Finally, on 6 May 2014, Grayling announced that the maximum sentence for causing death by driving while unlicensed, disqualified or uninsured will rise to 10 years, with a maximum of four years for causing serious injuries. The Justice Secretary also announced a wider review of all driving offences, to take place over the next few months, which Brake has welcomed.

Julie Townsend, deputy chief executive at Brake, said: "Unlicensed, disqualified and uninsured drivers have no right to be on the road; if they kill or injure someone, it inflicts needless devastation as the result of a deliberate and illegal choice, and the penalty must reflect that. That's why tackling woefully inadequate sentences for these selfish individuals is a cornerstone of Brake's Crackdown campaign. We are extremely grateful for the way Richard Graham has supported his constituent, Mandy Stock, in bringing this injustice to the government's attention, with such a positive result. As such, we are very pleased to recognise him as our road safety Parliamentarian of the Month."

Richard Graham, MP for Gloucester, said: "This award helps highlight that sentences for disqualified drivers who kill are being changed because of my work with, and for, my widowed constituent Mandy Stock. It reminds everyone that individuals can make a difference when a government is prepared to listen. If just one life a year is saved, our country will be a better place."