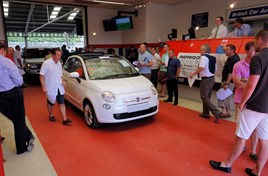 The average value of used cars sold at auction across the board decreased 3.4% from £5,259 to £5,153, according to the National Association of Motor Auction's monthly market report.

Despite the Easter break, volumes were only down 1.1% versus prior month at 109,271, according to the association, and more than 9% ahead on a seasonally adjusted basis.

First time conversion rates showed a decline from 86% to 75% as an average for the month – figures showed that the weeks surrounding Easter were the poorest.

Average values by age profile and the average percentage of original cost new price rose across the board, buoyed by falls in average age and mileage.

First time conversions for fleet and younger part-exchange profile cars (2.6-6.5 years old) showed the steepest declines at over 15 percentage points from the previous month to reach seasonal lows of 73% and 69%.

This coupled with a steady increase to days on site, may be partly responsible for the apparent robustness of values.

Paul Hill, NAMA chairman said: "With a further increase in new car registrations reported for the month of April it was surprising that the used car market also remained buoyant.  This implies that the market may well have turned a bit of a corner.

"Early May has brought better weather and with it other distractions for the retail used car buyer, although it would appear that the sales momentum has not been lost.

"There is no doubt that there are now more cars in the trade as a result of increased new car sales but generally speaking this has not damaged values too much. However, there is a better choice of product for the trade buyer and conversion rates have shifted as a result.

"May is expected to be a fairly stable month in terms of used car demand and value performance with the caveat that unless the market takes a marked upturn, concern remains over the buildup of certain unsold product.  If new car sales continue at the current pace, expect a drop in demand for late plate cars especially as retail buyers become tempted by ever better new car deals."

Fleet Poll
Do you expect working from home to become your 'new normal'?
Vote
View all
42