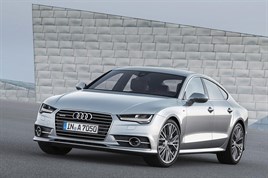 The new generation A7 Sportback will be available in the UK in the last quarter of 2014, with pricing to be confirmed nearer to launch.

Two petrol and three diesel units will be available from launch, offering power outputs ranging from 218PS to 333PS, and compliant with stringent Euro6 emissions legislation.

Many aspects of the 3.0 TDI clean diesel with 272PS have been newly developed. In the 'ultra' version with 218PS and front-wheel drive, the 3.0-litre V6 is capable of returning 60.1mpg, corresponding to CO2 emissions of 122g/km.

The top of the range engine, the 4.0-litre TFSI, is available in the Audi S7 Sportback. It delivers 450PS of power and uses COD (cylinder on demand) technology.

In the versions with front wheel drive, the dual clutch unit replaces the eight-speed multitronic CVT transmission and has been fully redeveloped.

For engine outputs of 272PS and above, quattro permanent all-wheel drive can be supplemented with the sport differential, which actively distributes power between the rear wheels.

The new Audi A7 Sportback features wheels with diameters ranging from 18 to 21 inches. Some engine configurations are equipped with new lightweight brakes. The power steering system features an electromechanical drive for high efficiency.

The  Audi A7 Sportback now features the latest generation of the Audi modular infotainment system built around the MMI.

The system uses a new graphics processor from Audi’s partner Nvidia and includes MMI touch, enabling the driver to scroll and zoom in lists and maps via a touchpad.

The MMI radio plus operating system is standard and can be supplemented as an option with a head up display that projects all important information onto the windscreen.

Audi connect, which links the five door coupe with the internet via theLTE high speed data transmission standard for ultra-fast 4G click-through and download functionalit, is an option.

The Audi phone box option is also now available. It enables occupants to connect their mobile phones to the car‘s antenna for improved reception simply by placing them in the phone box compartment. The top of the hi-fi line is the Bang & Olufsen Advanced Sound System.

The front seats can be optionally equipped with ventilation and massage functions, and there are four seat versions to choose from.

The assistance systems – including adaptive cruise control with stop and go function, the further improved night vision assistant and the Audi pre sense safety system – are also state of the art.

Design-wise the most striking changes to the exterior of the A7 Sportback are to the single frame grille, (which adopts the latest hexagonal design), to the bumpers (which have been subtly resculpted), and to the tailpipes (which now have wider, trapezoidal apertures).