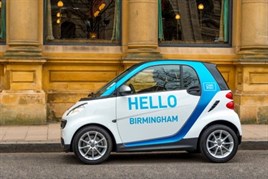 Car2go, a car sharing business which operated in London and Birmingham, has announced it is closing its UK operation.

The company stopped operating in London last month and revealed on social media it would withdraw completely from the UK by the end of this month.

It said in a statement: "We've listened closely to customer feedback and, taking the UK's strong culture and tradition of private vehicle ownership into account, we have decided to withdraw from the UK marketplace.

“We’d like to say ‘thank you’ to everyone who has used Car2go in Birmingham and London.”

Set up by Daimler and Europcar, Car2go was launched last year in Birmingham and had operated in London since December, 2012.

The company said it would reimburse people who were already registered, with a £14.99 one-off payment, for the scheme in Birmingham.

It said: "As the world’s largest free-floating carsharing provider, we will continue to observe the UK market for cultural changes towards the free-floating model.

“Car2go will continue to be a worldwide success story as we operate in a total of 25 cities around the World with more than 700,000 customers.”

City Car Club which is the UK’s largest independent car club and operates in 17 cities across the UK, told Fleet News that Car2Go’s demise was not altogether surprising.

James Finlayson, managing director of City Car Club, said: “Although Car2Go has been unable to make its business model work in the UK, the car club sector in general is in robust health.

“The latest figures from the industry show membership is up 9% this year on the back of five years of sustained growth.”

City Car Club’s business model relies on members returning the car to the original parking space, rather than Car2Go’s model where cars are left across a given area.

Finlayson believes it’s an important differentiator, with cars available in consistently convenient locations, something which City Car Club has found to be essential when operating in large cities such as Birmingham.

He continued: “In our experience, it isn’t so much the UK culture of car ownership that’s the barrier, making people aware that there’s an alternative out there that’s the real challenge.

“Once people understand how car clubs work and the cost savings involved, it’s often a no-brainer for them – renting is becoming increasingly the norm.

“We also don’t see car ownership and being a member of a car club as a binary choice. Often people join us because they have only one car in the household and occasionally need access to a second car and our offering successfully fills that gap.”