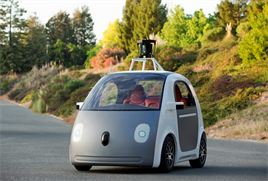 Google has revealed a self-driving car without steering wheel or pedals.

Part of the company’s long running self-driving car programme, the early prototype vehicle lacks the traditional driving controls, instead relying on a smartphone app to set the destination.

The car has roof-mounted obstacle sensors, and can currently only travel on routes visually mapped by a traditionally-driven Google sensor car. These create 3D maps of the surroundings, and understand the road layout and topography.

Sensors can detect objects up to two football pitches away, detect blind spots, and moving objects of a reasonable size.

“You can take a trip downtown at lunchtime without a 20-minute buffer to find parking. The elderly can keep their freedom even if they can’t keep their car keys. And drunk and distracted driving? History.”

The vehicle has a storage area for luggage, two seats for passengers, and a ‘Go’ button to start the journey, the route of which is displayed on the dash mounted screen.

The technology firm plans to build around 100 vehicles, with initial tests on Google land. To test on Californian roads, Google will have to introduce manual controls.

Road tests will begin this summer, and the vehicles will be limited to 25mph.