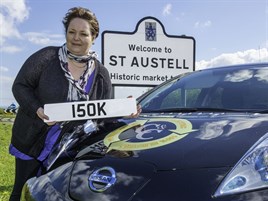 A Cornwall cab company has clocked up 150,000 miles and more than 37,000 individual fares in its fleet of 100 per cent electric Nissan Leaf taxis.

St Austell-based C&C Taxis – the first cab operator in the county to employ a pure electric vehicle – added the first Leaf to its 10-strong fleet almost exactly 12 months ago.

It now has five and has seen its business soar as regular customers, local businesses and tourists have taken to its smooth and silent ride and environmental benefits.

Meanwhile the company has slashed in excess of £40,000 off its annual fuel bill thanks to the Leaf’s ultra-low running costs of around two pence per mile.

C&C Taxis owner, Michelle Williams, said: “When we took our first Leaf a year ago we could never have imagined how successful it would have been. The fact we now have five and have hit the 150,000-mile mark says it all.

“Investing in the Leaf has probably been the best decision we’ve ever made as a company.

“Our customers love them and most of the big hotels in the area now use us as their taxi company of choice, which has been a real coup. In fact, many of the hotels now ask guests who book a taxi whether they’d like an electric one and then specifically ask for a Leaf.

“The Leaf has been truly transformational for our business.”

The company still operates a number of diesel cars for longer fares but very much sees electric vehicles as its future.

Williams added: “Most of our business is done in and around St Austell but we use the Leafs for fares up to 40 miles away all the time. They can easily get there and back and all the driver needs to do is give it a quick charge when he’s back in town.